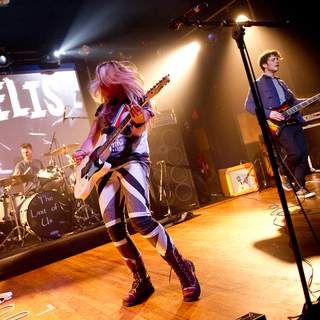 My band Kenelis are seeking a drummer & bassist for awesome summer shows this year. Please get in touch if you are interested mel@kenelis
You must be available to gig on 2nd August and be available for the whole day and night.

Brighton based Kenelis deliver a hard hitting mix of Alt Rock with elements of Punk Grunge & Hardcore. High energy emotive live performance have seen the band share the stage with the likes of Reuben, You Me at Six, The Blackout, Fightstar, Ghost of a Thousand and The Levellers. Magazine features and excellent reviews in Rocksound Magazine, Big Cheese Magazine, Viva Le Rock, Diva & G3 as well as well known Online Zines Room Thirteen, God is In The TV & Alt Sounds.
Kenelis have been winners of Brighton Music Awards 2013 'Viewers Choice' and London's highly acclaimed FeedMe Music's band of the month. Other success includes; Room Thirteen band of the month, NMT band of the year and G3 magazines band of the year.

Kenelis have played Festivals including three consecutive years on the famous Rock Sound Cave at Guilfest. Kenelis have played numerous UK Pride Festivals, Toronto Pride and many of the established London venues including Scala, The 100 Club, IndigO2, Relentless Garage, Borderline, Monto Water Rats, Jamm, 229 & The Cobden Club.
Kenelis released their Debut album 'Remember How It Felt on their own label 'Black Grass Records' in 2009, followed by their second album 'Fake' in June 2011. Singles 'Jealous' 'Sick' and ' We Could Die Any MInute' were a popular hit with the fans and crowd pleasers at festivals. Angus Cowan (Redwood/Reuben/Jamie Lenman) produced both albums.
Their most recent release 'Move', a 4 track EP was produced by Chris Coulter (Arcane Roots) and 10th December 2012. Mel teamed up with some of the best Brighton talent fusing Hard Rock, Punk Rock, Metal and Grunge to create a Power House EP of hard hitting riffs and ear pleasing melodies. Back in studio Kenelis are now in pre production for their next album, which will see the band returning to their Alt Rock roots with a Hardcore influence new to the Kenelis sound.

Other Projects: Mel Sanson was the performer and vocalist in The L Project charity single 'It Does Get Better' that reached number 10 in the Official Independent UK Chart raising thousands of pounds for Stonewall & Diversity Role Models.

“Keep a close eye on this lot” Rocksound Magazine
"Kenelis are a massive band with enormous potential" Uplifted Music
"We need a cool band to rock our socks off and we have found the perfect band in the form of Kenelis" Room Thirteen
"This pretty much proves how good they are in one sentence as these support slots are not for sh*tty punk bands with no future’" Punk Prospect
"We love... rock band Kenelis" G3 Magazine
"They know how to lift a crowd" Diva Magazine
"Breeders meets Belly retooled with a hardcore framing" God Is In The TV
"All the infectious elements of yesterday’s unruly music scene that’s absent from a lot of what’s sifted through today’s sound waves" Alt Sounds
"One of the UK's next generation Stadium Rockers" Loud Horizon Magazine
"Fronted by Mel Sanson, one of the mightiest rock ladies on these shores" When Sally Met Sally
"Fantastic live performance. Make sure you catch them this year" Lesbilicious

Screen name:
MelKenelis
Member since:
May 05 2014
Active over 1 month ago
Level of commitment:
Very Committed
Years playing music:
12
Gigs played:
Over 100
Tend to practice:
2-3 times per week
Available to gig:
4-5 nights a week