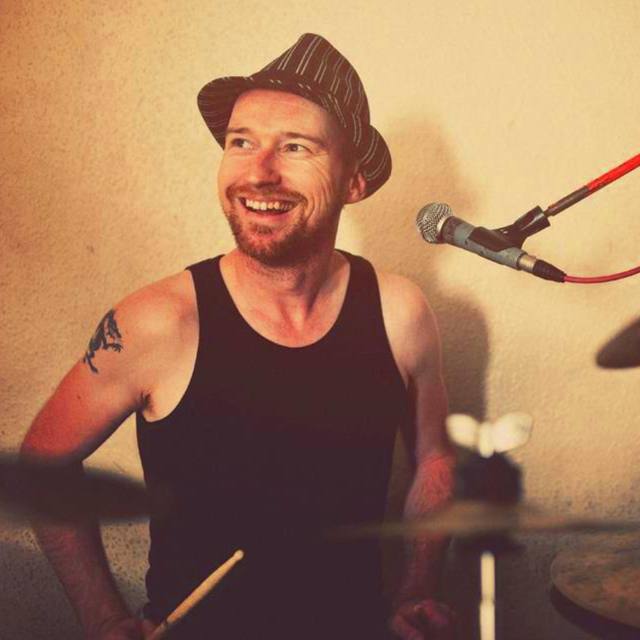 "Stuart has a fond interest in the percussion instruments." - preschool report 1982
My earliest memory of hearing any form of music must be Kate Bush's 'Babooshka', when it was released in 1980 and I was four. Indeed, popular music has been a most convenient vehicle for all my childhood memories. It would be a while since those formative years at preschool in Cape Town until I'd be faced with a full set of drums to ponder. There was some chance involved as well, because I'd been through primary school without touching anything resembling a proper drum, and had since forgotten my natural affinity to bash things. When my family moved to a different suburb, I changed schools and there I chanced upon a 4-piece Ludwig drumkit in Mod Orange in the stationary depository. I was hooked, but so were a handful of other young 14-year olds. The youthful exuberance and rivalry that followed pushed us all to new limits in speed and beat creation. Some discipline was introduced in the form of the school's 'Drums and Percussion Course' where I learnt notation and rudiments, and in which I earned top marks at the end of the curriculum. I was lucky to be included in the school's Eisteddfod entries for two years running as well as remain the primary drummer in the school Jazz/Rock Ensemble - The highlight of which was playing drums to the school anthem of all things!

At around the same time, my parents bought me a drumkit and so it was that my first kit was also of a citrus variety in colour: A second hand Maxtone 5-piece in bright yellow wrap. I set it up in the garage of the family home and worked at playing to my favourite songs using my collection of tapes, my dad's earphones and 70's era Sony mini-hifi (pictured). I enjoyed working out beats to what I heard on the radio as well as my dad's collection of music. My early influences therefore consisted of noteworthy bands such as Queen, Cream, Led Zeppelin, Elton John and Dire Straits. I was intrigued by the radio music around that time, including the synth pop of Prefab Sprout, Tears For Fears and A-ha, as well as the more rock-worthy of late eighties music like Simple Minds and Toto. It was however my introduction by my aunt to The Police which really spurred me into working out more sophisticated beats offered by none other than Stewart Copeland. Indeed and ever since, any drummer that Sting has worked with remains in the top 5 of my all-time favourites and influences, but Stewart remains my numero uno.

My successes at secondary school lead to my steadfast involvement in the school play and stage performances, which included a fantastic production of Grease, as well as a collection of others. 'A Musical Carpet Ride' showcased popular West End and Broadway shows like West Side Story, Cats, Evita, The Phantom Of The Opera, Les Misérables and Miss Saigon. These were wonderful times and I secretly long to return to theatre work. I was also introduced to functions and cover band playing at around this time - learning pop music arrangements was fun but I longed to compose my own beats and arrangements.

During my schooling I was no doubt influenced by the music my peers were into, and in 1992, my musical world turned upside down with the arrival of Nirvana and the Seattle sound of the nineties. I was auditioned in an original punk rock band called Tourettes, influenced by Nirvana and Red Hot Chili Peppers and was hired on the spot. What followed for the next few years was a baptism of fire into the seedy underworld of playing alcohol-fuelled house parties and the live music circuit in the city. I was able to play my own beats to my bands own music. After school, the group relocated to London for a year before moving back to the African continent.

I would go on to playing in and recording with various rock bands upon return to Cape Town, notably P.B.D and Vitamin X. But at the turn of the millennium I was asked to join a then up-and-coming rock band called Soulja. The debut album release was a general success with the lead single (a cover of Bob Marley's 'War/No More Trouble) being play listed on national radio. The band went on to headline one of South Africa's biggest music festivals for two years and enjoy good media coverage, along with a number of music videos produced.

I relocated to London permanently in 2006 and finally realised my dream of playing the live circuit in the 'big smoke'. I enjoyed (and still do!) the thrill of playing such popular muso haunts like Camden's Dingwalls, Purple Turtle & Underworld and others like Monto Water Rats, The Halfmoon and Hoxton Underbelly. Playing in clubs where one's musical heroes played in their heyday has always been a thing of wonder and pride for me. Recording with blues rock outfit The Shotguns at Abbey Road Studios has been a major highlight in my musical career in the UK. I've also been involved in some tribute acts, notably for ZZ Top and Prefab Sprout, two completely different musical styles and an endorsement to my adaptability in most musical genres across Rock, Pop, Funk, Fusion, Jazz and even electronica.

I call London my home now. My function band experience here has taken me to some of the most opulent places one can play in. More recently, I've produced and MD'd Prefab Sprout tribute fan events across the UK. I look forward to the next session as much as I do the next live show. I'm currently working with The Shotguns, All New Exiles, Juicebox and Tom Wardle.

Give me a shout through the contact link if you need some tubs-a-thumpin'...