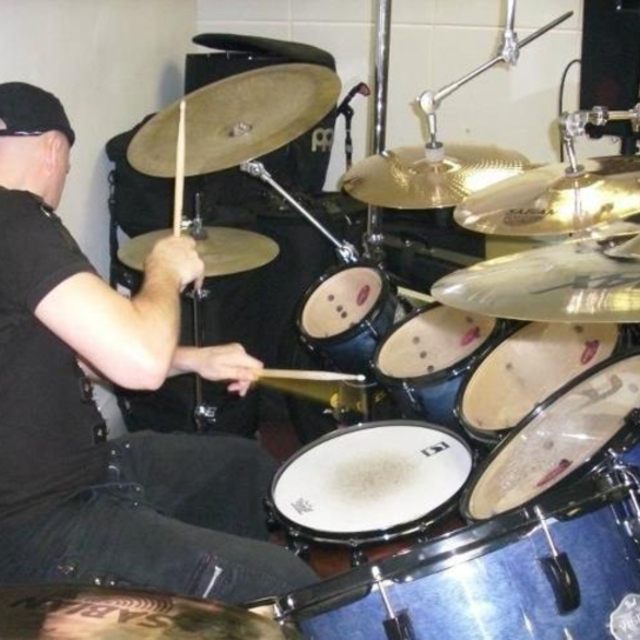 Hi, my name is Gavin and I have now been playing the drummer for 20 years! I am influenced by a wide range of music from British punk (not the f***king Sex Pistols!) to Norwegian black metal (more than just Mayhem and Emperor!).

I am a really easy going bloke with no ego at all except to play the best drumming I can. I can play most things in many different ways and as such am always open to constructive criticism.

I have played all around the UK in death metal. grindcore, punk and psychocbilly bands and have toured with bands such as Napalm Death, Demented Are Go and Breed77.

I have been taught over the years everything from rock and jazz to extreme metal and Latin drumming, I use two bass drums but also own a double pedal so can also play with just one. I can play machine gun type double bass drumming, double bass drumming with groove and blast beat like a mother f*cker!

I have my own pro 10 piece Pearl double bass drum kit and use an arsenal of crashes, rides, china and splash cymbals.

I don't really care too much about age (I am 34) or experience, you don't have had to have just come off of a world tour, but I am looking for a bunch of people/or person who knows their way around their instrument and can hold a tune together.

I can also play a little piano and guitar but this has always been only for playing songs by my favorite bands or to come up with ideas for others to turn into complete songs. I have no wish to be a guitarist and I am not going to start telling anyone else what to do or how to do it.

I can play other percussion instruments as I've just completed my B.A Music degree at Southampton University but don't let that put you off. I am not the most academic type at all, don't even have any A levels, I just got in on my drumming experience and ability.

I am looking to either join an established band or an individual with a look to starting something new. I don't mind which. If I am really honest I have tried to start a black metal band for a while now but it is just damn near impossible due to a lack of other BM musicians. I genuinely love death metal, punk, grindcore so I would be more than happy to play in any of these styles.

I do want to take it seriously, and will do, but it must also be fun too! If you are going to end up sharing a small tour bus, traveling 200 miles to play a gig, not knowing when you will next eat or sleep you have to get on and love what you do otherwise there is no point!!!!