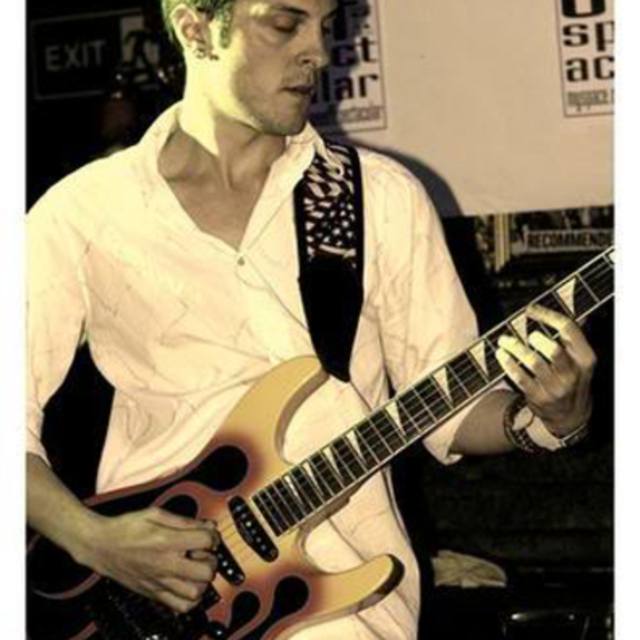 My name is Kris and I spent most of my youth playing Air Guitar to rock giants such as Led Zeppelin, Deep Purple, Bon Jovi, Guns N Roses, Van Halen etc. However, it wasn't until leaving college at the age of 19 after having spent the previous few years studying Performing Arts, that I picked up a guitar and began learning the basics... a few basic Jovi tunes seemed enough for the time. However, it was hearing a certain Randy Rhoads for the first time, that sparked my determination to at least 'try' and play like the widdly guitarists of the 80's. Two years spent locked up in my room studying the styles of Randy Rhoads, Eddie Van Halen, George Lynch, Jake E Lee, Richie Sambora and Warren DeMartini had begun to transform myself from a 'terrible' guitarist to a slightly less 'terrible' guitarist (it is hard work after all). After three years of cramming all that I could and countless broken strings later, I then went on to join my first 'real' band The Hyads (check them out at www.myspace/thehyads). At first it seemed like a match made in hell... an indie band enlisting a Hard Rock/Heavy Metal guitarist should never have worked. However, in fusing the best elements of both genre's, both parties were surprised at the impressive results. The band went on to gain national recognition for their balls-out, no nonsense, energetic live set and I remained the sole guitarist of the band during my 2-3 year spell. In this time I toured relentlessly up and down the UK with the band playing headlinging gigs and also providing support to some of the UK scene's biggest current names such as: The View, One Night Only, Mani (Primal Scream/Stone Roses). However, differences in musical direction was always a problem hovering on the horizon, and after years of hard work, non stop partying and some of the biggest laughs ever, I decided it was time to move on to different things. In my years since, I have been gigging as a solo artist and teaching on the side, but the stage is now feeling empty on my own on wish to recreate that kind of buzz you only get when in a band. A new chapter is now beginning in my long battle to realise a dream, but the future is there to be taken and only time will tell if it's a battle faught and won.