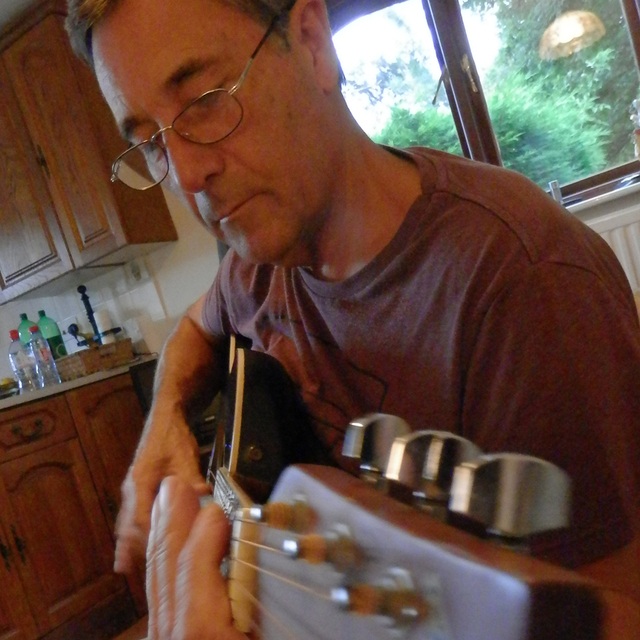 Eddie the Strings is a pseudonym because my name, Colin Edwards, has been totally drowned out of the internet because of the motorcyclist of the same name.

My focus now is acoustic fingerpicking Country Blues. The style I prefer is Piedmont using my thumb to play a bass pattern whilst using my fingers for the rhythm and lead lines. Examples include Mississippi John Hurt's Avalon Blues, Robert Wilkins' That's No Way To Get Along and Blind Willie McTell's Statesboro Blues. I am playing at open mic nights to see how new songs go down and looking for relaxed gigs for people who like this music and I'm happy to do opening spots for other musicians. The music I have uploaded is electric with acoustic but I will be adding some live recordings when I have some that are of a reasonable quality.

Since changing direction I have played open mic nights around Devon and Somerset, played small festivals, supported other acts and been featured on local radio. I always get a good response from my audiences and have received a level of compliments that make playing the acoustic guitar worth every moment of effort put in.

I have added videos of a couple of Country Blues gigs (and one of electric because I have it). I am gently looking for more of the same type. I prefer music clubs, small intimate gigs and Blues festivals where people come to see good musicianship and appreciate the music.

I am also slowly building up a collection of my own fingerstyle compositions that draw influence from the instrumental tunes of John Fahey and other American fingerpickers. I have been working with a friend and we have recently released an EP: A Sacred Place, Bob Deakin and Colin Edwards. A YouTube link is on the videos link and it is available on Spotify, Amazon, iTunes etc.

Another are of development has been taking on work as a session guitarist on studio recordings. This has been down to the range of styles I can play and because I act as accompaniment to the songs to support and embellish them. You can hear this in the A Sacred Place EP on which I play all the instruments. My playing is about sensitivity and understanding what is appropriate for the material. I also play bass as you will hear on the EP. I did bass sessions for living many years ago so it's not a bolt-on but experience. Other than a drum machine and keyboards I can get a lot done - again, as you can hear on the EP.