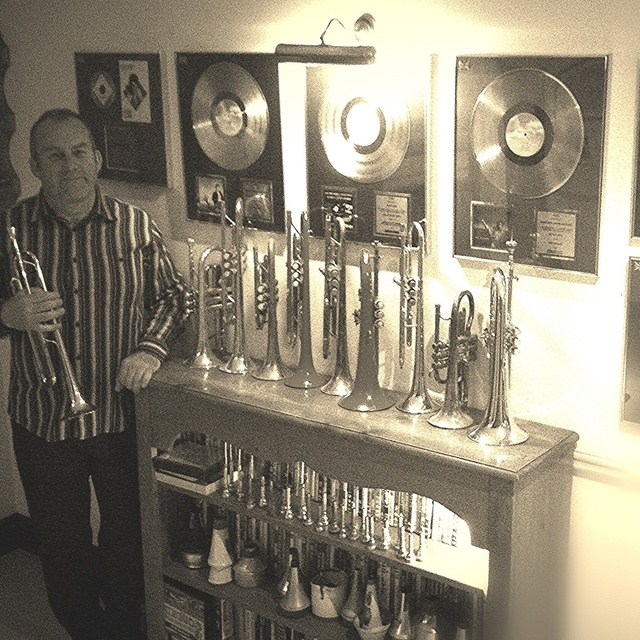 Dave has recorded over 170 albums and performed worldwide with most Pop and Motown artists over the last 35 years.

At the age of sixteen Dave auditioned on trumpet & cornet for a place with one of the most famous Military bands in the world - Band of HM Coldstream Guards . He then moved from Norwich to London to study trumpet and cornet (Prize - Winner) at Kneller Hall (Royal Military School of Music) with professor of trumpet & cornet Ian Mackintosh (BBC Symphony Orchestra) and his legendary cornet virtuoso father Jack Mackintosh, before taking his place with the Band of HM Coldstream Guards where he held the position of solo trumpet for seven years.

After ‘de mobbing' from the HM Forces in the early eighties, Dave began his freelance career in London with the BBC ‘Come Dancing' Orchestra directed by Andy Ross also playing for the Miss World competitions. From there he then began to play and deputise in the West End shows, various Palais (Mecca) bands in London including Hammersith Palais and Leicester Square, plus spending time in America (New York - Fort Lauderdale) and the Caribbean performing on the World famous cruise liner QEII.

Dave carried on his busy freelance work whilst he was at Starlight Express, spending a lot of time recording and touring with various 'Pop' artistes and the commercial side of the music industry.

Dave is credited on over 170 albums including many Gold, Silver & Platinum, Triple Platinum disc awards plus the famous Grand Prix du Disque award (PCTO), he can also be heard on many radio, television & film soundtracks.

Dave continues to freelance in London and abroad working with the top names in the music industry as well as being involved with music education, he is also excited to be part of many 'up & coming' bands and artist's from the UK and abroad.
Dave's trumpet playing can be heard around the world with such hits as 'Walking on Sunshine' Katrina & the Waves (Millions of copies sold Worldwide).