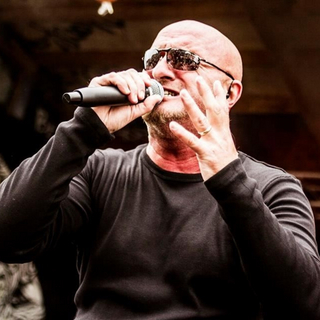 Performance biog:
Ian (Curly) has performed in London in the West End Shows: Miss Saigon / Evita / Starlight Express / Damn Yankees and Me & My Girl.
He is also very honoured to have worked as a backing vocalist to Irene Cara (Fame/Flashdance) and pop star Sonia on UK & European Tours, incl. TV appearances on Blue Peter & Pebble Mill @ One as well as 'Live at The London Palladium!'
Curly has also performed on cruise ships for P&O, MSC & Costa Cruises, sailing the Mediterranean and Caribbean as well as four World Cruises!
More recently, Curly spent a number of years singing in Gran Canaria, before returning to the UK to take up lead singing duties with NWOBHM rockers DESOLATION ANGELS, performing at rock festivals in the UK and all over Europe! Since then, Curly has fronted some great UK bands including ‘Snakeskin’ a very popular, acoustic rock covers band, as well as a successful Journey/Bon Jovi tribute!
He is currently singing lead vocals with The Don Powell Band, rehearsing and recording with a view to touring when Covid restrictions are lifted?