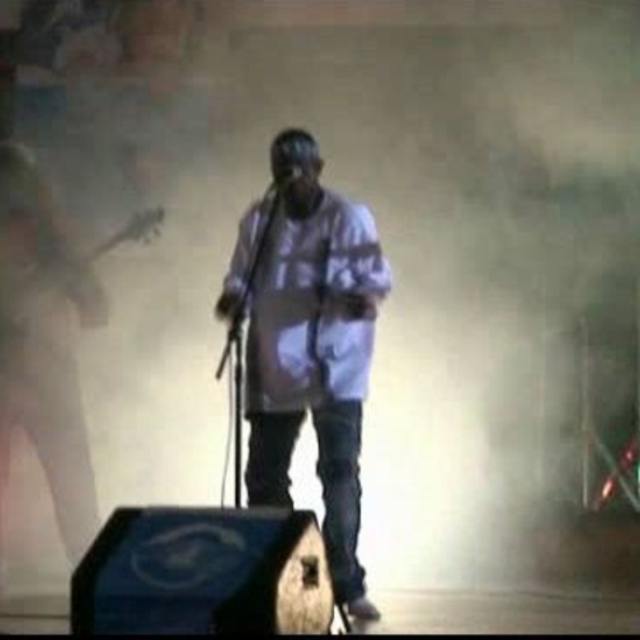 Long ago, in the mists of time, there came from Ancient Egypt a Blue Man. He was a mystic, a prophet, a savant. He walked among the people and brought with him a message of brotherhood and humanity which became the origin if the "spirit of Bantu".
He travelled far into many regions of Africa and the legend of the Blue Man went before him until his presence became mythological and the spirit of Bantu part of the African Soul, which became part of the African culture and the culture, was expressed through folklore and music. Thus the message of the Blue Man was encapsulated in a blend of philosophy, human experience and the musical rhythms created during the birth of that early civilisation, the origin of today's world.
Jo N'gala calls his music Bantu Blues and the message expressed therein, the Light of the Blue. He believes that as man has travelled to the far corners of the earth from that ancient world, he took with him the spirit of Bantu and it can be heard in many forms of indigenous music particularly in rhythm and beat. Therefore, anyone seeking a common identity with all other people around a sometimes hostile world can find it through Bantu Blues and Jo N'gala, the modern Blue Man.
His grandfather taught Jo how to extract a rhythm from a hollow tree to send messages to nearby villages in the Cameroonian forest and also how to make percussion sounds with his voice if there was no tree available. Much of Jo's spirituality has been gained through discussions of ancient customs and their origins with elders, when he was young which has made him bond with ancestors values to help him walking back on its feet when there is no way forward. In 2010, after run the World, He went back to Cameroon to design and made a new African drum and become the patent owner of the Idio-drum and the Idio-com.
His fascination with the story of the Blue Man has run parallel with the developing of his musical skills, which are wide and varied, and the two have become entwined to produce, for him, a way of connecting with people of all countries and beliefs to promote tolerance and good will.
Jo told Victoria Watts, for the British Red Cross media after been accredited as a Goodwill Ambassador for the Cameroon Red Cross: The world needs people to keep the humanitarian spirit alive by promoting it everywhere around the world, in the family, in school, in the street, in the workplace. We have to use all the tools necessary, such as music, because if we miss this opportunity, we are paving the way for a negative culture.
http://blogs.redcross.org.uk/fundraising-and-events/2010/06/a-song-for-haiti-from-cameroon-turning-vision-into-reality/
www.youtube/watch?v=pS_aVRxsIdI