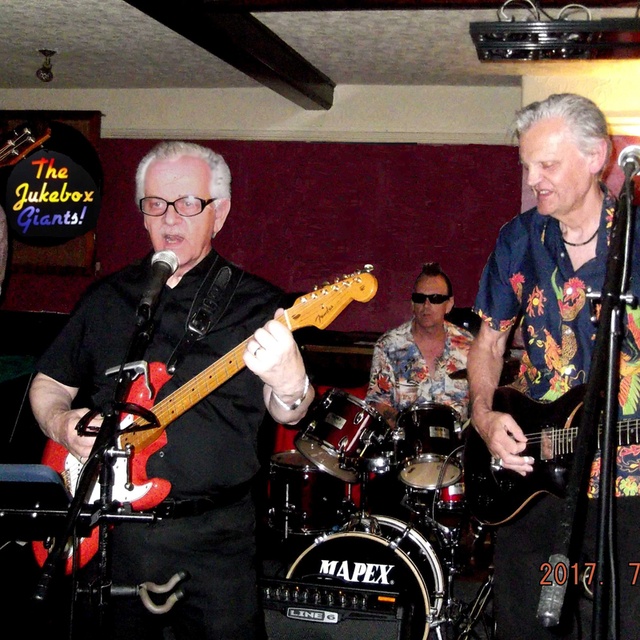 Updated on 25/01/17: Happy to say we have now found our new bass palayer and will soon be back gigging.

Updated on 02/01/2017. We're now in the market for a competent bass player who wants to play our kind of music. The right person will probably be 'mature' maybe as mature (or immature) as the rest of us!. If you can sing lead or backing, so much the better.

We're a gigging band (around 20-24 a year) with several return and new venues to contact for more gigs this year but holding back until the bass position is filled.

The Jukebox Giants is a Retro 50's and 60's Rock 'n' Roll band in the Notts/Derbys area of the East Midlands. A couple of us are, let's say, 'originals' from the era and we just love playing our kind of music which, we believe, strikes a positive chord with most audiences, ranging from the young to the young-at-heart! We gig regularly in our area and we're willing to travel for the best venues/events. If you'd like to book us for your event or venue, just get in touch. Find out more at our website www.JukeboxGiants.co.uk. And now find us on F/B at f/TheJukeboxGiants.

Screen name:
TheJukeboxGiants
Member since:
May 08 2008
Active over 1 month ago
Level of commitment:
Moderately Committed
Years together:
7
Gigs played:
Over 100
Tend to practice:
1 time per week
Age:
66 years

Just about anyone from the era, from Elvis, Buddy, Eddie, Bill Haley and the Everly Brothers to the Beatles, Cliff, Kinks, Searchers, The Big 'O', CCR & Stones. We also take the occasional excursion to later years to show how R'n'R continued to influence later generations of artists such as The Undertones, Bob Seger and the Silver Bullet Band and The Stray Cats. And to prove Rock 'n' Roll is still alive and kicking today, we're now playing what sounded like an undiscovered Jerry Lee Lewis song but turned out to be a brand new song by Chris Isaak - Live It Up! Find Chris's video it on Youtube - it's great.

NOT ON THIS DATE, THOUGH - we'll all be playing with Elvis, Buddy and Eddie in Rock 'n' Roll heaven by then!! For a current list of our gig dates, please visit our own website at ... www.thejukeboxgiants.co.uk.