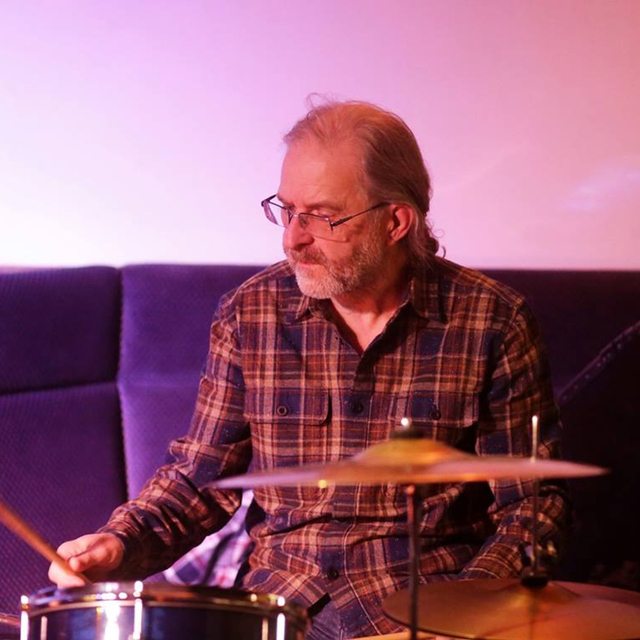 I'm Terry, I've been in lots of bands and I've had a go at most styles of music, and basically I just like music and playing. Don't want a record co. deal, or to gig/rehearse every night (well actually I would but I can't), but like to work with people who know their stuff and enjoy playing - and gigging!
I'm most familiar with classic rock, mainstream, prog, wouldn't turn down a jazz gig, blues or folk-rock, or goth - Jazz-rock is something I'm keen to do - not so keen on country, punk, metal - but I don't like to limit myself to particular styles.
>> At the mo I'm playing in a jazzy, swingy sort of band, also a band that does dances with songs from 50s to present. What I'd really like to do though, is some jazz-rock - or even big band swing! A bit of grooving, a bit of impro, some freaking out and some cool steady grooves - fantastic!!
>> So if you're one of the above looking for a drummer, I could make time for you.
tezzerii - g (m ail) :o)

Over the years I've been through beat (beatles, stones), blues, rock, prog, R&B, folk-rock, indie, a bit of jazz - just about everything really, and loved most of it - I was never keen on country, hard metal or hard punk, altho they're not all bad, and they have been influential also. I would count classical music as an influence too!

I'll use up to 5 toms & 5 cymbals depending on the kind of band/music. All quality stuff. Recently got a double-kick, which I'm working on. But I'm not into machine-gun blasts! Also recently got an e-kit! Very handy for rehearsals. And I can mix the two a bit if required.