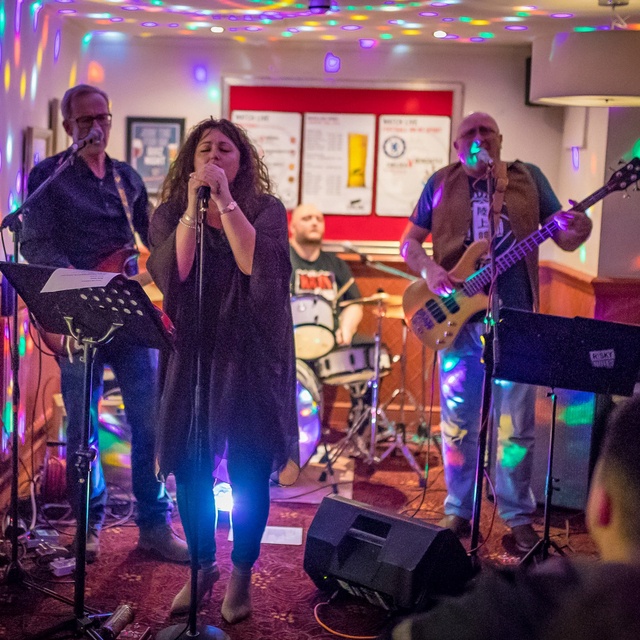 The Essex Based 4 piece Pop/Rock/Party band with energy. They play music from the 70's to present day and try to entertain, not just play!

Steve owned a guitar from the age of 9, and practised chords until he eventually jointly owned a record label and also a licensed entertainment agency. He played rhythm guitar on numerous recording sessions and produced several tracks including one of Switzerland’s top recording artists of the 80’s. Steve was the rhythm guitarist with ‘Tunnelvision’ - they released a record in the 80’s had a fair amount of success with radio air play and the college/university circuit.

In 2015, after almost 30 years away from the music business, Steve decided to try and learn bass as chords were now difficult for his fingers after so long away from the guitar - and after playing along to tracks on the internet, he became bored and placed an internet advert for a guitarist willing to practise with him. Eventually after trying to work with several guitarists, he found a guitarist, and together with Steve’s son Brad - the band was formed.

He has many influences and likes many types of music. Although he doesn’t have a favourite bass player. He says, “ I really cannot stand complexed playing that simply confuses the song - the bass with a driving beat is the real essence. I always play my own basic beat on numbers and rarely follow the recorded track - that suits some, but not the rebel in me lol.”

Whilst at school Brad had the opportunity to learn to play drums in the music lesson, his development led him to play in the school band. His interest in drumming grew and he purchased an electronic drum kit (the neighbours were so thrilled) - and was encouraged by his elder brother who was already a drummer in widely known bands in Essex.

After leaving school, work commitment, marriage and children occupied much of his time - but when his Dad, Steve (Bassist) said he was getting together with a guitarist to practise a few numbers, he offered to play drums for them and the rest is history. His very strong percussive rhythm with Bassist Steve — are the backbone of the band.

Having always wanted to be the singer in a band, Sarah used to practise singing along to recordings as a young girl. However, her realisations of actually becoming a singer were put on hold for work marriage, and bringing up her three girls. But when the band Risky Notes needed a vocalist and her husband Dave suggested Steve speak to her - she came along for a rehearsal session and instantly worked well with the band, picking up the songs very quickly and adding to the band’s overall sound.

Graham's band career started when he was 15 and he, plus three school mates got together and formed a school band playing mostly original material. At that point, playing bass guitar, we had some success for a couple of years then he switched to six string electric guitar. A while later he formed a band and we played pubs for a few years mainly blues and rock covers. Marriage and bringing up a family took over and became his focus — however always keen together back into a band when the time was right he was delighted to join the 'Risky Notes' line-up. He has always enjoyed a wide range of music and believes — as — Robert Plant said, "Music is for every single person that walks the planet.”

Too many to mention