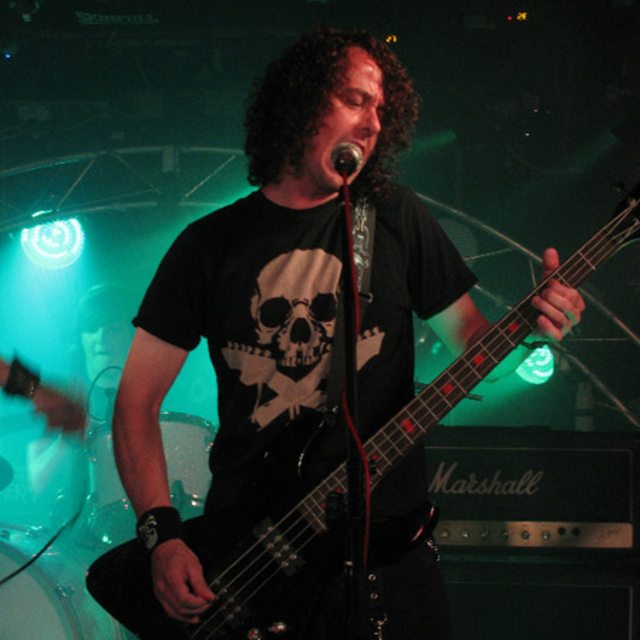 "People are definately taking notice of these guys" - Rock Industry

Bio
KARMA SLAVE was formed in February 2008 in Leeds, West Yorkshire, With uncharacteristically hard rock sound, thrashy guitars and unique song writing while still relying on various '80s/90's rock/metal formulas, Hard Rock was the aim of the game. The band spent the biggest part of 2008, playing a series of local clubs in Leeds. KARMA SLAVE was on the move again, landing gigs in well known venues th...roughout Leeds. In late July 2008, the band played their first ever gig at The Primrose, which sold out at the first time of asking with songs like "Deathrow" and "Shotgun Shooter" being a great sucess.
Nonetheless, KARMA SLAVE continue to sell out small venues and managed to get on the ROCK SOC bill at The Subculture Club in Leeds, earning them a bigger stage and more fans after adding songs like "STRENGTH" and "ENSLAVE" to the set. February 2009 saw KARMA SLAVE play ' THE COCKPIT' Leeds to one of the biggest crowds in SLAVE small History. Selling out in one Leeds biggest music venues.

In early May 2009 KARMA SLAVE recorded the long awaited EP " SHOT AT THE BAR". Wasting no time at all, SLAVE released the EP and set out to rock and roll where ever when ever. With style, verve and enthusiasm, thenSLAVE stormed through Leeds and earned themselves bigger more fan based gigs. SLAVE's reputation ran high and a headlining shot at the ' ROCK OF AGES' mean't that SLAVE could start a fresh at one of Leeds's top music venues, RIOS. With no hesitation SLAVE took the stage at rocked out in rio's, covering la rockers LOVE/HATE's 'BLACKOUT IN THE REDROOM along the way. The same night was the night KARMA SLAVE released their first EP 'SHOT AT THE BAR', with songs WHISKEY TRAIN, SHOTGUN SHOOTER and ENSLAVE proving a hit with the fans. In early November SLAVE announced on their Myspace and pages that they would be supporting old school rockers 'DUFFLEGOAT' at the 'SNOOTY FOX' in Wakefield. This was the first time SLAVE would play a gig outside of their home town. Excitement ran throughout the band and the SLAVE were on their way. Despite this success SLAVE wanted more. Bigger, More exciting venues.

KARMA SLAVE in 2010 opened for ENUFF ZNUFF & FASTER PUSSYCAT at the 'CORPORATION' sheffield, it was an awesome way to incorporate a huge mashup with fans/friends. After the gig, SLAVE took time out to write new material and in May 2010, KARMA SLAVE set off on another venture rocking across Yorkshire, with bands such as Dirty Penny, Electric Wasted and Baby Borderline.

Headlining Gigs in Bradford & Hull would follow and KARMA SLAVE ended the year knowing 2010 was a great success.

2011 also kicked off with massive success, including more headlining shows and a support show with Neil Buchanan's MARSEILLE!
Come mid-june KARMA SLAVE shared the stage with legends LA Guns at Bradford Rio's and the response was immense.
And now, with plenty of new gigs and festivals booked - SLAVE's journey to success is ever-increasing in speed

We are currently searching for a Vocalist
Current Members are:-