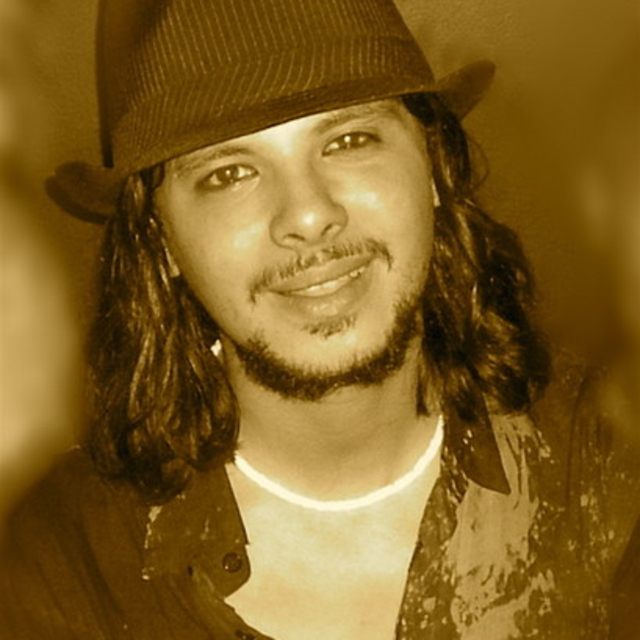 Mounir Baziz known by most as Moon has been playing the violin since he was eight. After studying at the legendary El Moussilia music academy in Algiers, Moon began to shine in the local scene, and was soon performing at the top recording studios and concert halls in Algeria. He was the youngest member of the official Algerian TV ensemble at the age of twelve. Moon then represented his country at many international music festivals all over Europe and the Middle East. After this early success he set off for Spain, where he joined many gypsy bands and picked up influences from Spanish flamenco music. Once in London, Moon mastered the electric violin and various new effects and techniques borrowed from Jazz, Blues and Soul music. The result was a completely new and exciting style. Also, his distinctive way of playing the violin vertically on his knee and his ability to blend into any style of music intrigued everyone. Before long, he became one of the most in demand artists thrilling crowds in concerts all over the capital.
Today, you can catch Moon playing alongside an array of very exciting artists and bands including legendary percussionists Bikram Ghosh and Pete Lockett, Abdullah Chhadeh, Amar and Hossam Ramzy among others. Moon is also always present in landmark events such as Womad, Rise Festival and internationally the Anti-Crise, Darbar South Asian Music Festival and Marrakech Film Festivals. His performance at the world famous Abbey Road Studios in the first ever global satellite broadcast went out to 134 countries around the world. As a recording artist Moon’s repertoire is just as impressive. His playing can be heard on records by the likes of Shemran, David Watson, Laurence David, Sam Sallon and countless others. As a solo artist, Moon has produced and orchestrated many pieces and scored the critically acclaimed and Award winning BBC documentary “The Boys From Baghdad High”.
Moon’s abundant musical talent extends to many other instruments. He plays the Mandol, several types of percussion, Spanish Guitar, Oud, Bouzouki and Persian Tar. Examples of his mastery of these instruments can be found in tracks such as Maya, Nomad and especially in recordings by atmospheric London act Shemran As ever, Moon is still pushing the boundaries by getting involved in different projects and taking his music to new artistic territories and far flung corners of the world.