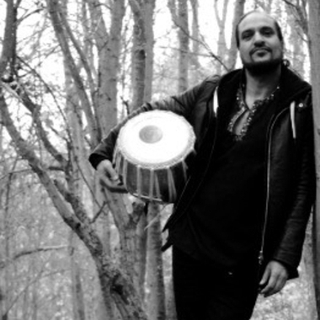 Mendi is a classically trained tabla player, composer and musical visionary with an international reputation. Mendi was born and brought up in Birmingham, UK and has made unprecedented strides in bringing his instrument to a global audience. From a very young age, Mendi started performing with Westernised Asian bands. By the age of eighteen he had completed many successful international tours. Being brought up in the multi-cultural city of Birmingham, his music has been inevitably inspired by the rich and diverse musical styles he has been exposed to and reï¬?ects his Birmingham upbringing in his music.
Â
Mendi has collaborated with artists diverse as Pundit Shalil Shankar, Peter Gabriel, Darius Brubeck, Anand Shankar, Dave Oâ??Higgins, Courtney Pine, Akram Khan, Kepa Junkera, Dan Crary ,Luis Salin, Ustade Fateh Ali, MBE Malkit Singh.

Mendi has been touring for several years extensively with Pundit Shalil Shankar, a senior disciple of the legendary Pundit Ravi Shankar, and together they have performed in prestigious venues and festivals around the globe.
Â
In 2003, the duo, Mohinder and Shalil, were invited by the President of Chile to play at a tribute concert for the former President Allende and folk singer, Victor Jara, at Chile stadium for 70,000 people. In 2004 the duo completed a very successful tour of South America; 18 concerts in Uruguay and Argentina. They were invited by the Argentinians most loved tango guitarist, Luis Salinas, to perform a concert in the capital, Buenos Aires. In May 2006 they completed a very successful tour of Mexico, playing in the prestigious venue of Balas Artist in Mexico City. His collaboration of tabla and tango guitar playing was loved by all, and they received a standing ovation. Further more, a beautiful relationship was built, winning the hearts of music lovers of Argentina.
Mendi has traveled the world, andÂ played with native musicians in Brazil, Argentina and the Basque Country Spain. expanding and enriching the flavors of his music life.
Â
2015 Mendi composed and performed the world's first Tabla Trang Concerto with orchestra percussion.

2017 has been a particularly busy and exciting year with Mendi playing tabla and percussionÂ on the â??Take That: Wonderlandâ?? tour. He performed to over 500,000 people at arenas and stadiums across the UK and Ireland.and was given the privilege of center stage for 12 minutes in the middle of the show, for a acoustic medley. Â  Â Â