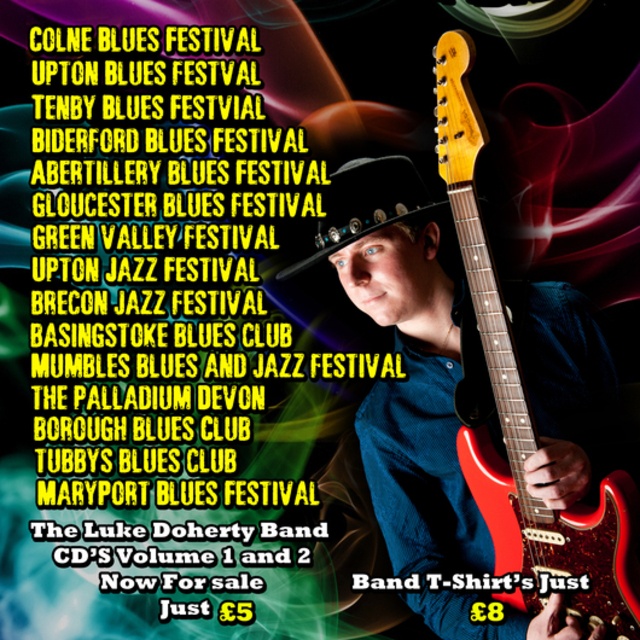 Luke Doherty - Was born on 29th March 1994, in Newport, Gwent. He had an interest in music at a very young age. Although no one in his family play an instrument, he was determined to learn to play something, and at the age of 5 he started playing piano, but didnâ€™t like it. He then asked to play the drums but was told by a drum teacher he was way too young and to wait a couple of years. He then settled on a 1/2 size acoustic guitar which he had to give up after 3 months due to medical reasons. At 71/2 he was nagging his parents again to learn guitar, so they bought him a second hand 1/2 size electric guitar and a second hand amp and he has never looked back. He instantly became hooked on blues, intently watching any blues musicians he could find on TV or DVD.
Luke met Eric Clapton when he was 9yrs old at the John Mayell 7Oth Birthday concert in Liverpool. Also aged 9 he asked his parents if he could take Rock School exams which he sailed through to grade 8 by the age of 11, as well as a extra performance grade 8. He was then interviewed on BBC Radio Wales because he was the youngest person to have passed grade 5, 6 and 8. Also when he was 10 years old he recorded Parisian Walkways, of which Gary Moore has a copy.
Although being faced with a few serious medical problems Luke has been determined to pursue his passion. He visited Cheethams School of Music in Manchester and Guitar X in London for some advice, but to be told that he was way too young to proceed with his exams in electric guitar, and they said that they had never come across this situation before.
At the age of 11 he met Eric Clapton for the second time and Eric instantly remembered him. He has also met some of his other personal heroâ€™s including Peter Green, Andy Fairweather-Low and Jeff Healey.
His parents took him to jam sessions in local pubs so that he could play Blues with other people and at the age of 12 he was asked to open a 3 day Music Festival, on the main stage, with some adults form local bands. In 2009 he supported Buddy Whittington in the Globe in Cardiff and has since supported Buddy on a few occasions. In 2012 he was very fortunate to meet the ultimate man of Blues BB King. Luke has now played at many Festivals and Blues Clubs, including Upton Blues Festival, Abertillery Blues Festival, Tenby Blues Festival, Colne Blues Festival, Gloucester Blues Festival, Brecon Jazz Festival, Upton Jazz Festival, Green Valley Festival, Basingstoke Blues Club, Tubbyâ€™s Blues Club, Borough Blues Club and is really looking forward to playing at Mar­yport Blues Festival.