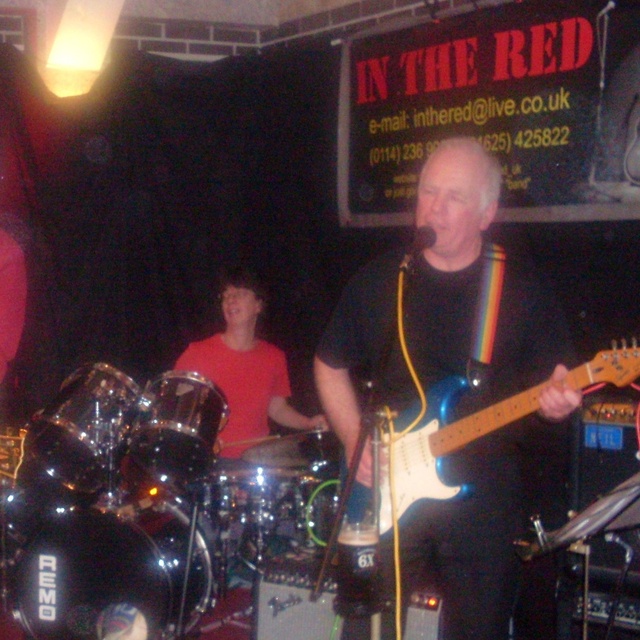 60+ years young rocker, still with (most of) own hair and teeth, looking to join or help form a band of similar old fogies who also want to grow old disgracefully. I used to play lead guitar in my last band in Sheffield, but we stuck to songs that we could get away with! However I have heard a lot worse than us, and paid for it too! We used to do a lot of private party gigs, usually from word-of-mouth recommendations so somebody must have liked us. I am not expecting overnight fame and riches, and won't be surprised if I end up doing charity gigs. It's nice just to have fun with like-minded friends. Don't expect to give up the day job, but it's possible that, like me, you have already retired (or got made redundant!).

Willing to play rhythm guitar, and to have a go at bass if that gets me in a band. My old bands used to do lots of 12-bar and 3-chord rock and pop stuff from the 60s, but I would prefer to get into classic rock of the 70s. I am not totally out-of-date however - I have been to see Muse and Evanescence both three times! I am fairly adaptable, willing to play many kinds of rock, pop or blues etc.

I live in Macclesfield but could widen my search area to include East Cheshire, South Manchester, North Staffordshire, bits of Derbyshire and Sheffield if necessary.

My favourite bands include Dire Straits, Van Halen, Led Zeppelin, Deep Purple, Muse and Roxette! None of them need lose any sleep though!

My gear includes 2 X Marshall VS100 amps, Squier, Jackson, Peavey, Yamaha and Washburn guitars, Carlsboro PA amp with AXL speakers, Peavey and Cruiser basses and McKenzie amp, various pedals, mikes and stands, and some primitive lighting gear. And a practice drum kit and a couple of big black cabs with 15" speakers in them. I am not rich - just good at spotting bargains at car boots and on Ebay!

I now have a friend in Macclesfield who is an experienced bass player with good gear, who is also willing to join, and do some backing vocals.

I also have a friend in South Manchester who might be willing to join/form a band with me. Both of us are willing to muck in on lead, rhythm, bass and/or vocals, but ideally we would like a better lead singer who can also play some guitar or bass. And, of course, a drummer. My friend also has access to a practice room in Sale which we can use for the cost of a charitable donation.

If there are any born-again old rockers out there who fancy joining us but don't currently have any gear, you can use my aforementioned spare gear. So no need to blow your pension pot on your own gear straight away.

VIDEOS: (The link between Youtube and Bandmix seems to be a bit erratic, but the videos are marked as public on Youtube).
Some old Youtube videos (I am the short guy and some songs are better than others!):-
Just go into Youtube and enter "lordmuckofmacc". These videos are from In The Red's first gig.

Well, my favourite bands are Van Halen, Dire Straits, Deep Purple, Led Zeppelin, Muse etc., but none of them need lose any sleep! However, as I said, I have heard worse than me!

A few decent guitars; Marshall amps; mikes and pedals, bass gear and some cheap lighting gear off Ebay. Too much to fit in my car, probably!
And I own a PA system which is good enough for a practice room or small venues. And a practice drum kit.