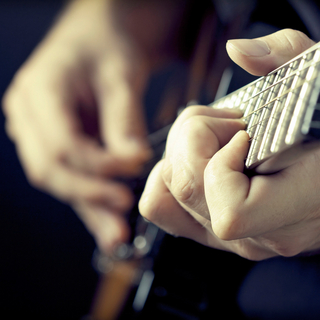 Hi, I'm Leo.
I love playing guitar and have developed my own style of playing through a lot of influences. I am always trying to come up with something new and fuzing some genres to create something exra-ordinary!

My Influences would include early blues guitarists such as Elmore James, Buddy Guy, Freddie King, Muddy Waters and Skip James.
I have a big take on the music from Jimi Hendrix, Cream, The Rolling Stones, Eric Gales and Eric Johnson.
I studied jazz guitar in university and have since been able to mix the styles.
Im wokring on new techniques such as country playing and classical.

I currently own two Fender Stratocasters one from USA and one from Mexico. Both perfectly intonated and tuned in standard or sometimes to Eb and both with a floating tremolo system in place!
I run through a few pedals being an Electro Harmonix Soul Food, Boss blues driver, Jimi Hendrix Fuzz face and of course the Cry baby wah pedal.
I use two amps, one Marshall AVT150H Head with the cab, and I can connect it to my newer Fender Bassbreaker 15 which an awsome valve reverb amp.. Nothing can compare!