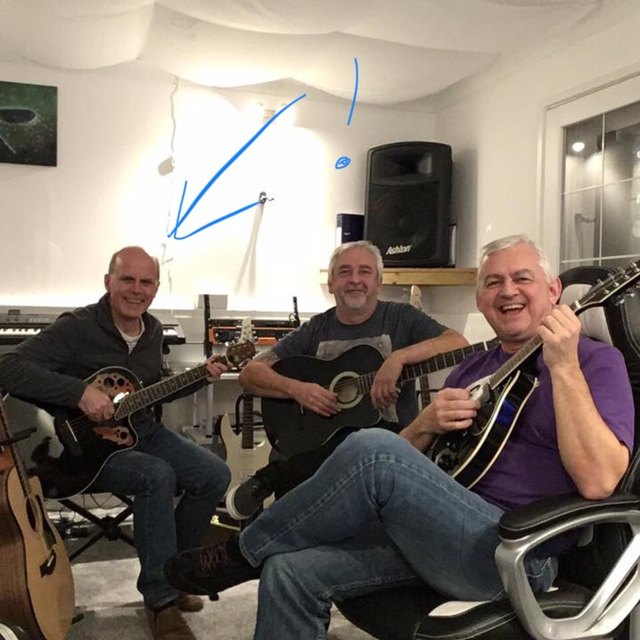 Hi, I am a mature / immature (as in 60 years old but still trying to decide what I want to be when I grow up) guitarist and vocalist. I have been out of commission for about 4 years for work and personal reasons, but am now back and ready to get going again.

I sing (to some extent!) and play lead and rhythm, electric and acoustic guitar, and have gigged and recorded both lead and backing vocals included some reasonably complicated harmonies – which I love!

As well as band stuff I have also previously collaborated to write, produce and perform an entire multi-media 2 hour musical stage show (performed in the Crescent Theatre Birmingham). I love the bringing together of music, visuals and live performers.

In terms of styles I grew up on the big rock songs (most of the big live Floyd numbers, Satriani, Gary Moore) and moved on to gentle acoustic numbers, Clapton strat type stuff, and vocal duets. I also wrote/ co-wrote stage musical style numbers, and then gigged and recorded traditional blues.

Update - as at June 2018, I am exploring playing without a guitar pick - I have uploaded a new track 'It Takes Time' - which is an instrumental showing a slightly different guitar style.

Across this time I have enjoyed playing meaningful guitar that I believe fits the needs of the piece and song – you can form your own opinion on whether it got there from the track examples!

What I am looking for

I would love to collaborate with a Beth Hart or a Nora Jones, or join an established country band or soft rock outfit that has female vocals, which are the best for harmonies in my view. If you are in need of an empathetic new band member – give me a shout.

Or, if you are a talented (and perhaps frustrated) vocalist / writer who simply cannot find the talent you seek to complete what you want to achieve, then please take a listen to my tracks and give me a shout if interested in a collaboration to write, record, and if things are working, gig and maybe even recruit and build a band.

Or, as I also have an interest in musical theatre, if you have a project in mind or need some help with something ongoing – then give me a shout.

I am fully mobile and have all the musical gear needed.

I have uploaded sample tracks below, all recorded and ‘produced’ by me.

Each Time you Look at Me: me singing a piano ballad from a stage musical

I knew this would be love: singing/ harmonising/ playing acoustic with my daughter

Dancing in the Dark: singing (all be it in a key a little high for me!) again with my daughter

You Say I’m Crazy: a more produced track with friend and daughter – not my vocals but all guitars are me

Screen name:
kevin344821
Member since:
May 09 2018
Active over 1 month ago
Level of commitment:
Very Committed
Years playing music:
40
Gigs played:
50 to 100
Tend to practice:
More than 3 times per week
Available to gig:
2-3 nights a week
Most available:
Nights

Everything a gigging or recording guitarist vocalist needs to (at least in theory) sound good to great.