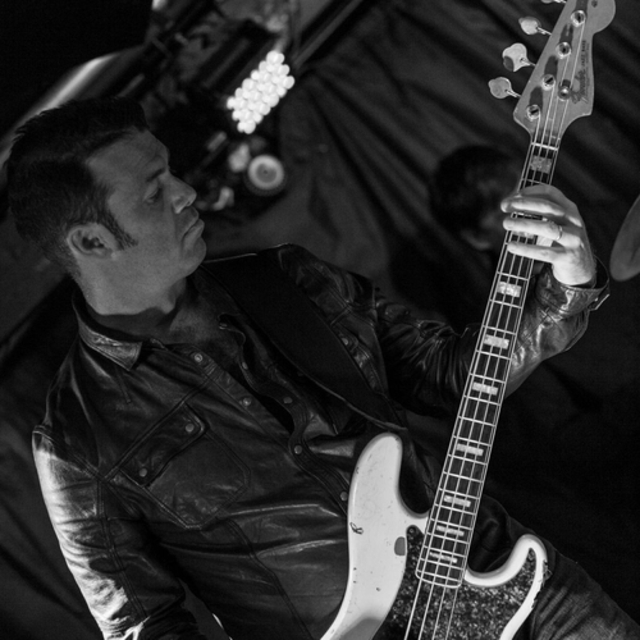 I'm an experienced bass player, with a 1980's indie / power pop / punk and new wave mentality. That's the era that influenced me the most, and that's the music that made the biggest mark on me. I'd much prefer to be collaborating and playing original kick-ass material (although I'm well-versed in doing covers too). I'm based in Kent but can get anywhere without too much grumbling.

I'm currently between bands, having been lucky enough to play bass with my teenage heroes: 'The Messiahs'. This was made up of two members of original Screaming Blue Messiahs (Chris Thompson on guitar and Kenny Harris on drums). Sadly, that band has ended, as Kenny sustained an injury.

I'm a dad who doesn't want to play 'dad-rock', but accept that I'm going to look pretty sad on stage with 20 year-olds. But don't let my age fool you, I look reasonably youthful (due to genetic fortune rather than appropriate lifestyle choices); I still have all my own teeth; and am not dying my hair (yet).

I've been playing continuously for nearly 40 years, and I still love it. In terms of playing style; I'm not into flashy dextrous wizardry; I leave that to lead guitarists. I'm a three-note-Johnny-with-a-plectrum and a long strap, and much prefer to lock in with a drummer, to form a rhythm section that's as tight as a camel's sphincter in a sandstorm. I've got ears and I use them: My approach is to listen to a song, work out what it needs – and serve the song, not my ego. If the song needs to have an open A hammered all the way through, that's what it gets. Sometimes, if a listener notices the bass, it means the bass player is doing it wrong. So sometimes, I opt for a bass that you can't necessarily hear, but can feel right in the solar plexus. To assist me in this endeavour, I use a battalion of Precisions (you can't have too many P-basses): 1969 Fender Precision, plus a pre-CBS 1963 P-Bass, and a batch of basses that I've built myself. I'm a vintage-guitar man and anything old, growly, wooden and warm is good for me (I'm still referring to bass guitars, by the way).

I'm honest, loyal and reliable (I mentioned I have my own teeth, right? You get a little forgetful at my age). Having left bands to get my career straight - and my family provided for, I'm now ready to abandon all of that to pursue a shallow and hedonistic existence of booze and groupies. Just kidding. I love my wife and kids dearly, and would love to 'scratch that itch' again. I want to recapture that feeling of a warm arc light on my face, a little dry ice swirling around my ankles, and the polite smattering of applause from a bemused audience. Let me know if I'm sharing too much, won't you?

In summary: I'm always looking for talented, honest and enthusiastic individuals; a blinding guitarist; a powerful front person with intelligent lyrics who can belt it out - and calm it back down again; and a solid drummer. In return, you can have my soul. That's fair, isn't it?

A brace of Fender Precisions (from 1963 to 1970's), Gibson Les Paul Triumph Recording Bass... plus some self-built basses.

I'm also beginning to experiment with pedals again, but nothing anti-social... just your clean boost, chorus, and valve distortion type things. In truth, I'm a luddite and just like a well set up bass going through a high quality sound system - just as God intended.