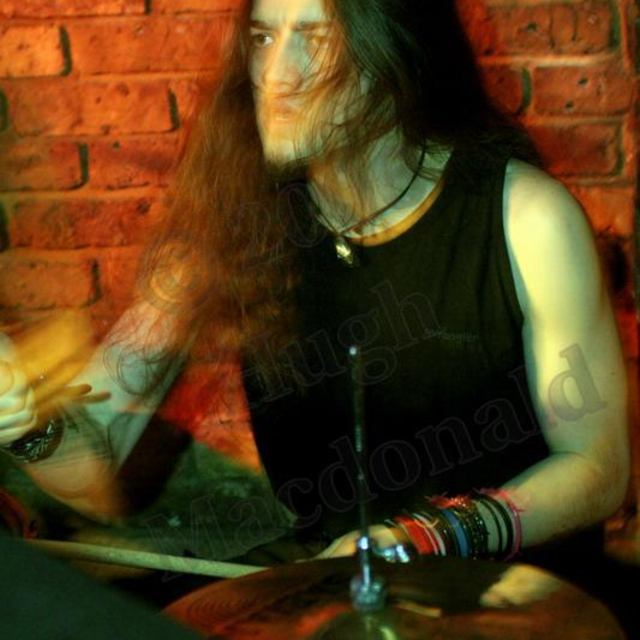 Joe has been playing drums in one form or another since the early age of 5, originally starting on pots and pans in the age old tradition of the drummer in front of Play bus on BBC. After he had exhausted the teflon coating on his mothers ovenware and broken all the paint brushes and chopsticks in sight, he was assigned a Bb cornet and told to calm down and learn a real instrument and study the more classical element of music. After a few years of life in the brass section Joe and his little sister Naomi decided to nag and pester their parents for something that would drive their neighbours wild with anger and make them go elsewhere! After a few birthdays had passed, the nagging finally paid off, one Honner Percussion drum kit turned up on Christmas morning 1989. The house was never the same. Rows over who was on the drum kit first ensued and epic battles over who had bought what cymbals and where they went on the kit etc. After the novelty of having a drum kit wore off the kit was reduced to a very expensive clothes rack that engulfed the room they lived in. Their parents then decided that it was time that either the was kit gets used for its intended purpose, or it goes to 'A worthy home!'. So with this in mind Joe and Naomi decided that the clothes had better go back in the cupboard and the drum kit should get a thumping in a more productive way. The plan was to get Naomi into the youth brass band that Joe was already a member of. The plan worked to great effect and Naomi became not only the brass band drummer but the brass band mascot to boot (not literally). The drums were now in continuous use and it was decided by all concerned that it was time to actually get drum lesson to make sense of all the intolerable noise coming from the loft where the drum kit resided. All eye were directed to the friend of the brass band leader (Tim Norris), a local drum tutor and session player called Glenn Clarke. Lessons were booked and the drums were now being used productively.

Lessons were held at 'The Winchester Music Centre' on Jewry street in the heart of Winchester, in a basement room known to all those in the know as 'The Dungeon'. This was the venue were Joe and Naomi had lessons for a few years until Glenn moved his teaching rooms up to the King Alfred College, now the University Of Winchester. In the new practice rooms Joe and his sister could really stretch their "musical legs" as there was more space, better equipment and more of a hunger to learn. In these exciting new surroundings lessons restarted and a year passed and it was time for the skills of the Butterworth drummers to be tested on an official level. Soon after the exams started up Naomi rapidly lost interest in playing drums and focused more on her passion of dancing and studied full time at the Florian Ballet School. Joe stuck with the drums and acquired many grades up to level 5.

After a few interesting attempts to find other musicians in the Winchester area Joe paired up with 'The New Kid' aka David Pemble, in year 6 at Primary School and enlisted childhood mate Matt Morriss to start a band mainly playing Deep Purples classics 'Smoke on the water', Ac/Dc's 'Highway to hell' and other songs of similar ilk. This un-named project soon went the way of many Primary School bands and when the three progressed on to Secondary School they stayed friends but went their separate musical ways. At Secondary School Joe met up with childhood best buddie Alex Harbourne and they both focused on playing Jimi Hendrix numbers. So now the hunt was on for one more member of the band to join to make a half 3 piece band to play the hall at lunchtime for the benefit of the assembled masses every Red Nose Day, and boost the status of the 3 tiny boys with haircuts from a 1970's football calender.

Gigs followed very rapidly as the boys in and out of school status rocketed and the boys now going under the name of Impossible, were booked for assemblies and mates parties. After a few year had passed and more Green Day, Nirvana, Blur, Offspring and Raddish covers had been learnt, Joe went off to college in Andover to study music at GCSE level, leaving Alex Harbourne and Rob Payne to find a new drummer. At college Joe was introduced into the world which is known as heavy metal! After a few failed attempts to form a band in Andover Joe took his new found music home to Winchester and found a whole collective of people who now followed the heavy metal/alternative lifestyle. Amongst these people were boys from the local private school that went by the names of Mike Edmonstone and Will "C**t Girl" Pragnell who were in a band that went by the name of Self Remedy.

Self Remedy was a group of college kids who wanted to play something nasty and heavy. Gigs were always booked at the local watering hole, The Railway Inn. Even though none of the band were old enough to drink in there they gigged with local metal-electro fusion act Modular Series and Rap metal band Eightball. The music was experimental and bizarre, with covers of musical numbers and vast classical music suites transposed to thrash guitar. The shows were very entertaining and popular. A true spinal tapp band if ever there was one in Winchester. But as the story goes, all good things must come to an end and this one did. With college ending Self Remedy tried to stick together but to no avail. Joe was now setting his sights on more professional climbs in Guildford, at The Academy Of Contempary Music aka THE ACM!

The Acm was a new arena for Joe to experience. With people from all over the world bringing their own brands of music to the table. Death Metal from Sweden, Jazz from France and the Czech Republic, Pop from Transilvania via "the Cheeky girls", Heavy metal from the valleys of Wales, Dub rock from Norway, Samba from Columbia and Chilled out acoustic rock, Goth and Funk from the locals. With such a new and wide variety of music to choose from Joe tried to take it all in. But Joes passion for rock shone through and he met now best friend, Rich Mason. Rich first found Joe in a Live Performance Workshop at The ACM. Rich then approached Joe after the LPW and a new band was born. The hunt was then on for other members to join and a guitarist by the name of Andrew Lamey heeded the call and joined Rich on guitars. Ash was the next to join up on vocals but played a very minimal part as he was not a student at The ACM. This project known as 'Suicide In Progress' took a back burner when Joe was recruited into Ash's other band known as Industry Of Lies. This band was to be Joes first real outing into the world of a heavy metal band that wrote original tunes and had a theme of Anti Capitalism.

When Joe parted from Industry Of Lies he went back to Winchester to concentrate on his personal practice. As Joe was without a band he started the KV4 project with Kat Vary. This project was to bring music to the masses without all the suits. Joe also worked with a band called Dead London which had old time mate, Ash Radford as front man and was a new take on the old school stadium rock bands of the 80's. Joe managed to record one EP with the band before he left (mp3's will be available soon).While back in his native Winchester he started to put together his first self promoting web site which can be found at www.angelfire/theforce/jbutterworth and used this to try and secure sessions with other bands that weren't from the imidiate area and bands that were not aware of Joe. This site and some old contacts from the Acm landed Joe with an audition for Woking based rock band , D'raven. The audition went well and all there realised they all vaguely knew each other from previous social circles. Nothing came of the audition for Joe but D'raven are still drummer-less. After a while of plugging Joes site he e-mailed old gig buddies Nephwrack who hail from Derby/Burton On Trent. Originally just to say hello and a general how's life treating you Joe became aware that Nephwrack had lost their rhythm section to local goth band, Seasons End. With this new found information Joe speedily offered his services to the guys in Nephwrack and a new line up was born.

Nephwrack are now fully formed with Joe securely in their lineup as resident drummer. They are playing all over the country to all manner of people regardless of wether they want to hear Neph-music or not. With a following growing day by day things are looking good for Joes new found home. Gigs are springing up all over the country so if you want to go and see Joe and Nephwrack then check the Nephwrack web site which can be found at www.nephwrack and the offical Myspace website wich can be found at www.myspace/nephwrackband, and both of these sites are crammed with all manner of Nephwrack related trivia and now merchandise!

I am now searching for projects outside of nephwrack, with possibility of moving awayfrom neph for.

Anything and everything, literally