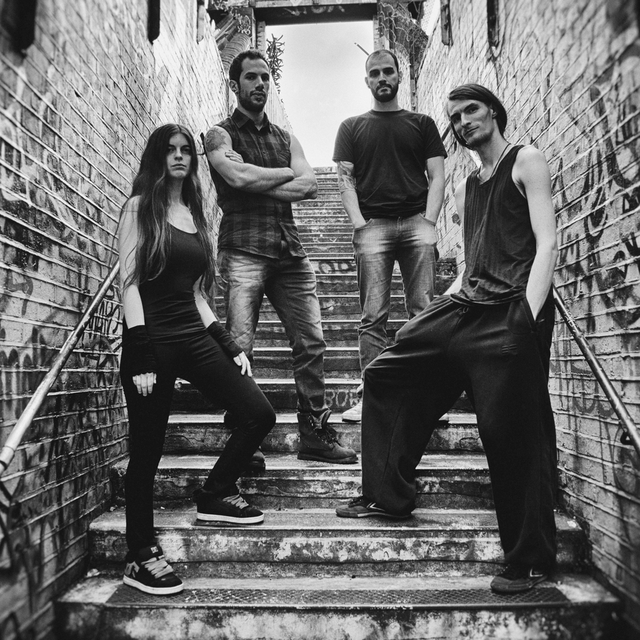 Eight Lives Down are a 4-piece extreme metal band, founded by Greek-Kiwi vocalist and lyricist Aliki Katriou. Originally formed in 2016 with British guitarist James Scott, bassist Marcin Orczyk from Poland, and Brazilian drummer Rodrigo Moraes Cruz, they released their first EP entitled "May Cause Death" in the same year. In 2017, Scott left the band and French guitarist Paul Allain joined in his place.
The band has its roots in groove and thrash metal but constantly branches out stylistically incorporating influences from prog-, death-, and black metal, as well as various other musical genres such as punk, blues, and traditional folk music. The vocals range from low growls and high screams to clean and even operatic phrases. All of this creates a truly unique sound - unmistakably heavy and angry, yet refreshingly different and unpredictable. Eight Lives Down, particularly Aliki Katriou, are known for their energetic live performances.
2019 saw Eight Lives Down playing shows in and around London, as well as in Germany and the Netherlands, reaching the semi-finals of Metal2TheMasses London, as well as the finals of the Female Metal Event - FemME battles.
In March 2020, Eight Lives Down opened for legendary Norwegian black metal act Ancient at their exclusive UK show in London. 2020 will also see the much anticipated release of their debut album, which will be released by the renowned extreme metal label Cult of Parthenope on September 5th.

Screen name:
Eight Lives Down
Member since:
May 31 2017
Active within 1 month
Level of commitment:
Very Committed
Years together:
3
Gigs played:
10 to 50
Age:
42 years

Slipknot, Sepultura, System of a Down, Disturbed, Metallica, Megadeth, Whitechapel, Iron Maiden, as well as blending other genres of music (punk, funk, blues, disco etc) into the sound.

We are a Greek singer, a Polish bassist and a Brazilian drummer and a French guitarist.

Enquire Within / Detoxen / Eight Lives Down