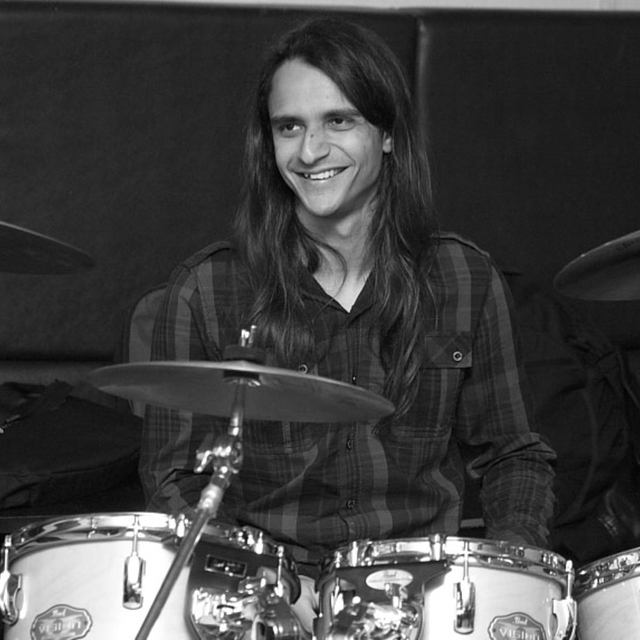 More about my work can be find bellow and on my website.

Looking forward to make music with you!!!

Dom Santoro is what we call "Jack Of All Trades", musician, Session Drummer, multi-instrumentalist (guitar, bass, percussion, cavaquinho) world traveller, Photographer, Videographer and Skateboarder. He started in music very early in his life; always fascinated by his family LP collection and with very accurate hearing that caught the attention of his family members in the early stages of his life, he prodigy started to play the electric guitar in the 90' at the early ages of four but was when he discovered the drums he solidify his path as a musician. In 1997 he joined the "Orchestra La Salle" in Rio de Janeiro, Brazil and three years later at the age of fourteen he was touring with them as first drummer, as he pointed to be a important music school in his life and understanding of music and arrangement.

He started a Progressive Metal with two of his Orchestra colleagues in 1998 and won twice consecutively Best Drummer in the "ROCK CEIA" an Independent Music Festival hosted by the School Association "C.E.I.A." very renewed in the 90' Niteroi independent music scene by the festivals and parties. He studied the drums with the "Samba Master" Marcio Bahia, Claudio Infante and in his early studies with whom became a great friend and influence in his playing through the years, the professor Alfredo Mitidieri.

Here is an extensively list of a artist, bands and orchestra Dom Santoro had the pleasure to play, record and shared his rhythms and beats through the years.

In 1999 he started skateboarding and consequently filming and photographing, which became also an important part of his life and involvement with the industry and also skateboarding three World Cups in Europe.

The year 2009 was very important in his life. Decided to pursue a life dream, Dom started travelling around the world with no date to come back, an one way ticket to the world and a couple of dollars in his pocket he started exploring different cultures, music, instruments, acquiring and learning through travel experiences and local knowledge, very unique and really important valuable lessons.

After travelled, lived and performed in more then 22 countries, 5 continents and hundreds of cities, Dom lives in Brighton, UK (an artistic, vivid and musical city) and at the moment, he's focusing in his music career as a drummer and audio-visual/documentary future projects around Europe and South America.