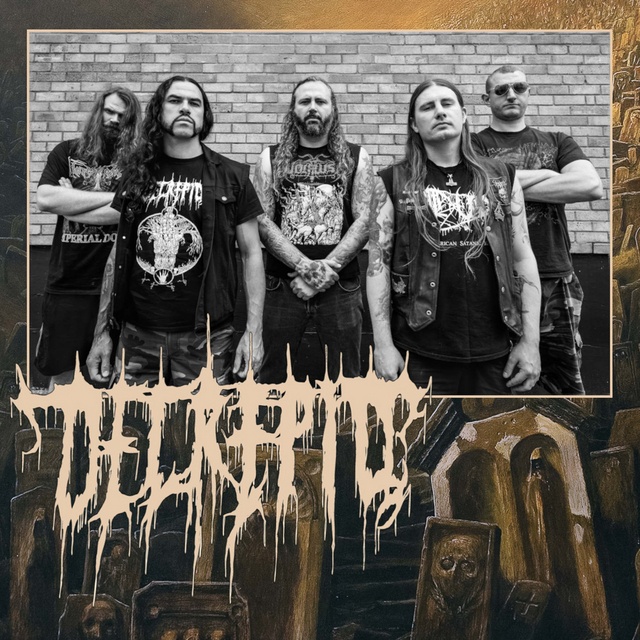 London based old school death metal band originally formed around '04/'05 then was put on hold until late '08.

Currently seeking a new guitarist to join the fold.

find us on instagram and face book for our email address

"Reborn in the miserable winter of 2008, what started as a thrash band in 2005 is now a violent, hatred sound of old school death metal!

Aggressive, energetic and passionately devoted to morbid, well written death metal, Decrepid were among the small band of groups around the world who decided to take a stand against the sterile and overly-technical direction the genre was heading in at the end of the last decade.

Since that time they have slowly but surely carved out a name for themselves as one of the strongest death metal bands in the UK. Making their official debut in 2011 with the Devoted To Death album (released on LP by UK label Full Tilt World and CD by Heretic Death Call Productions from Chile), the band quickly won an underground following, appealing to fans of such vital acts as Dismember, Bolt Thrower and Suffocation.

In late 2012 the band recorded a three-track demo entitled Mausoleum Of The Forgotten, officially released the following year. This short but ferocious statement of intent caught the attention of industry legend and death metal aficionado Dave Rotten of Avulsed, who promptly signed the band to his iconic label, Xtreem Music.

This first product of this union was the band’s devastating second album Osseous Empire, released half way through 2015, an opus created with the help of respected producer Greg Chandler (Esoteric), famed for his production work for bands such as Cruciamentum, Macabre Omen and Indesinence.

The powerful but unpolished production served the group well and Osseous Empire would boost the group’s reputation considerably, winning glowing reviews in numerous publications and online sites, with Metal-Temple even going so far as to describe it as a ‘perfect album’.

Alongside their adrenaline-pumping recorded assaults, the band have always remained an active live band, displaying their surprisingly wide appeal by appearing at festivals as varied as Desertfest and Incineration, and performing live with bands from across the metal spectrum, including Cancer, Angel Witch, Avulsed, Grave Desecrator, Desecration, Insision, Dead Congregation, Nunslaugther, General Surgery, Sodomizer, Entrails, Chapel of Disease and Hooded Menace.

Following the introduction of Tom Foran on drums and Alex H. Studholme on bass, the band has spent recent years working tirelessly on their latest forward-thinking release “Endless Sea of Graves” which further develops the band’s sound, while retaining their signature uncompromising approach to old school death metal.

A fierce and atmospheric release with endless ideas explored in a fantastically gruesome manner. Nothing on this album outstays its welcome, always pushing forward into new realms of morbidity to deliver a concise yet varied opus of rancidness that will certain wake cadavers with the wonderfully gross yet musically proficient Death Metal massacre."

All forms of music