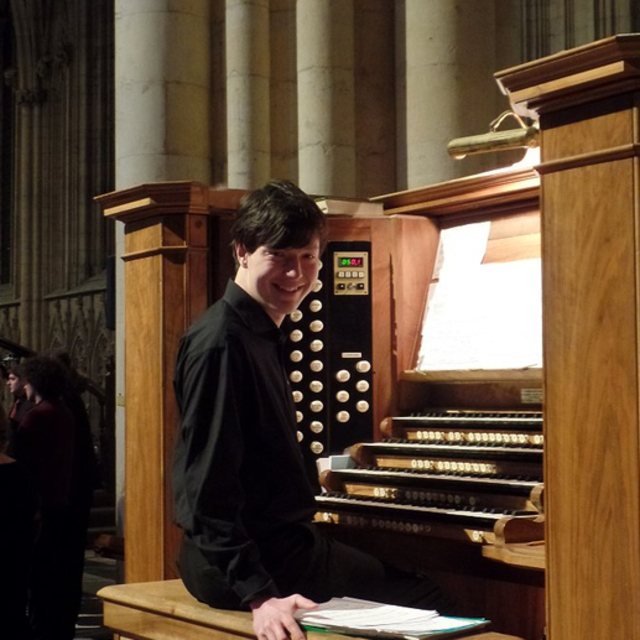 Born and brought up in Chesterfield [Derbyshire] Adam has been an enthusiastic Musician from a very early age. The key event which sparked his passion was seeing keyboard player 'Rick Wakeman' in concert when he was only 4 years old, he then acquired his first keyboard 2 weeks later and the rest.....as they say.....is history.
After being taught by a few tutors, he finally settled with Geoff Gratton, a life member of the Royal College of Organists and former Director of Music of Stavely Parish Church and Chesterfield Operatic Society. He did Grades 1-8 in Piano between 2006 and 2012 and is also Grade 6 standard in Oboe. In Addition he has taken many courses in Organ organised by the RCM which have ranged from Bach techniques to leading Church Music.

Indeed his most regular work lies within the Church. Adam was asked to take over role as Musical Director at St Barnabas Church Chesterfield in 2009, a role which he resumes during University holidays. He is now a member of the York and District Organist Association, Organ Scholar of York St John University [where he is entering his 3rd Year of Study in BA Music] and is heavily in demand as an Organist within the York District. His enthusiasm for playing the Organ has led him to undertaking a tour of 14 Churches in London in 2014 and also to playing the Organs of St Pauls [London], Westminster Abbey, Sheffield Cathedral and York Minster. He has also sung during worship and was a deputy chorister at Durham Cathedral for their broadcast of Choral Evensong on BBC radio 3 during November 2014. Furthermore he has appeared in 3 episodes of BBC's Songs of Praise, singing hymns with their SATB Choir under the direction of virtuoso 'Gordon Stewart' There are also some recordings, most notably of him singing in Bakewell Church with various choirs on a CD of Music composed by the late Richard Barnes. Short term future projects include; the publishing of his own book of Organ Preludes and Fugues, Composing a Carol for Kings College Choir and doing a tour to Hamburg [Germany]

His classical Piano repertoire is growing and he has accompanied many Choral days and different Choirs both in and outside of University. The most significant of these being a workshop led by composer Bob Chilcott in April 2015. He has also fronted the Lady Manners Orchestra, playing some Music by 'Puccini' on a tour of Italy in 2012. He has been invited to take part in the BBC Proms 2015 in London, where he will work with professionals to produce a piece of Music inspired by the themes of various evening performances and will be showcased at the Royal College of Music in July 2015. Rehearsals are also well underway in preparation for his stage debut at the Royal Albert Hall in November 2015 with a Male Voice Choir in aid of Cancer research UK. He has also resumed his place in the Chesterfield Philharmonic Orchestra.

Musical theatre is also an enjoyable area for him. He has appeared with a variety of amateur musical society's in productions such as Jesus Christ Superstar, Evita, Into the Woods, Guys n dolls, Tick tick boom, Phantom of the Opera, The Wedding Singer and Chicago amongst others. He also helped to produce a brand new musical called 'Fearless' which is based on a comic book fantasy world. This earned him a Silver medal and award in 2012 for 'Outstanding contribution to the arts in Derbyshire' He plans to write further musicals soon.

Another specialism is in the area of contemporary Popular. He always gives anything a good listen but is particularly fascinated by progressive rock and 80's Pop. He regularly jams with several bands and artists around the UK including 'Russ Dennett' [a former member of the Human League] and Rick Wakeman [and family] He also works closely with guitarist 'Gordon Giltrap' and has recorded several Piano versions of his material, all of which were well received and he hopes to record an entire album with those tracks. Other major influences include Russ Conway and E.L.O amongst others.

To showcase his diversity. He is piecing together an album of different styles and Genres but based around the solo piano concept.

A vast array of Roland and Korg Keyboards including a Keytar. Small mixing desk. Bass, Acoustic and Electric Guitars