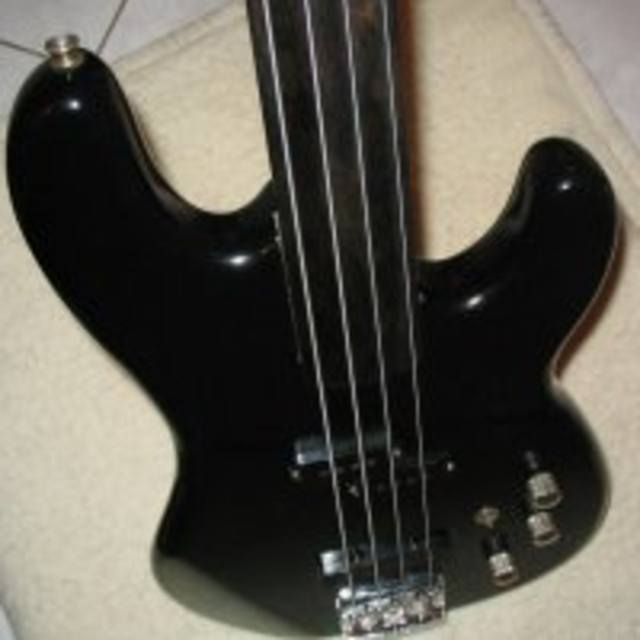 I started playing bass in 1986 at the age of fifteen after seeing
a schoolfriends bass for the first time. From then i was hooked and it wasn't long before i joined my first bands and was out gigging. The first real band was called 'Prime Example' &#8211; a rock band which gigged regularly, playing mainly original material and a few covers, and i did this for a few years.
In 1994 I took the plunge, quit my day job and decided to try and make playing music my career, so i went to Wigan and Leigh college to study music for the next two years where i played with the guys from StarSailor before they were signed. When they were writing and getting their sound together i was offered the chance to lay down some tracks in the studio &#8211; which i declined. I have to add that i was playing sax at this point and i felt there wasn't much scope for the sax in their music, (i'm still kicking myself over that one).
After Wigan and leigh college i moved to Barnsley to study at university for my degree in music, where i also gigged and recorded original material with a band called 'Sleek Leteco' which i did quite happily for about three years until most of the guys had finished their degrees. When the guys had left i joined a club band for a short period called 'Touch and Go',who gigged all over the Uk doing the holiday camp circuit and working mens clubs.

Around this time i was also playing regularly at jam nights with the 'house' band at a local pub. It was on one of these nights when a guy came up to us and said 'Do you guys fancy going to Denmark and playing with a circus for six months ?'
This was too much of an oppurtunity to turn down so we went off and toured Denmark for the next six months playing all the music that was required for the clowns, elephants, trapeze etc,and it was an absolute ball.
After six months i returned back to Barnsley and joined a band called 'Nugent' where we played working mens clubs,the 'Haven' holidays circuit and the 'Brannigans' nightclub circuit &#8211; which took us all over the country. I did this for about two and half years until the band split.
When 'Nugent' split,the keyboard player and I formed a club band called 'Devilish' where we played working mens clubs around the UK but mostly yorkshire and the north east. Then after eighteen months or so - and a falling out with the agent, 'Devilish' changed it's name to 'Jinx' and we carried on along a similar vein but with a different agent for the next year or so until we split due to family commitments (the guy running the band had another kid on the way).
Anyway thats about it really apart from a few gigs here and there playing sax with the Bolton band 'Tresspass' - http://www.tresspass.co.uk who i've known for many years, and I still turn up for the odd gig (or i did until my sax broke a short time ago &#8211; i so need to get another).