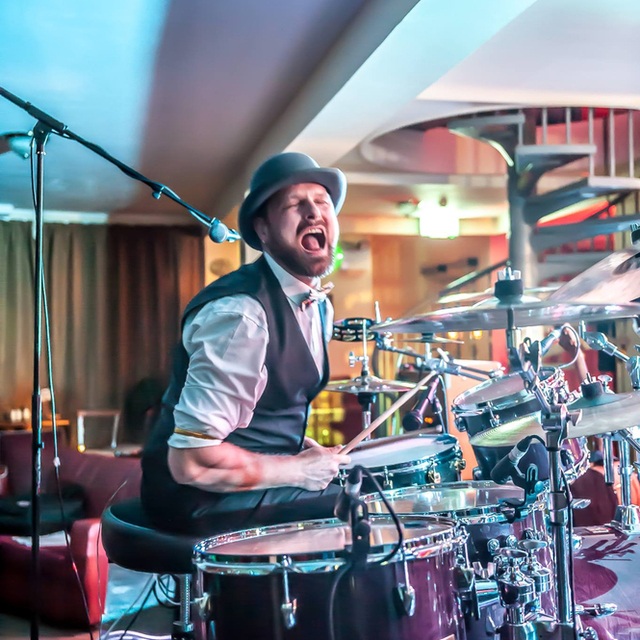 Drummer and singer from Slovakia living in Northern Ireland over 10 years, play the music 27 years.
Start as a drummer on Primary School in band called Rewell- changed name for ARCON later on. Arcon was my first band when I started to play drums with my bro Jany on bass guitar and we are produced together original songs and main songwriter was my friend from the class in the school guitar player Jozef Rokyta, later on join band his brother Blazej as songwriter and guitar player as well. I have amazing memories of this time with Arcon from school parties ,also town Trebisov - function and festivals, there was only one song I am singing called Ostan, and after all that was on scene my first wedding band called Tonic which stopped producing in Arcon band...., through all that I join the band called Bohema with guitar player and songwriter Laco Jakubciak produced again some great original stuff and play on festivals and also support on tour one of the top bands in slovakia Gladiator (support in Dublin as well with band Ajenda). All this was some experience and really good times in my music life, between that I also play in so many projects and wedding bands: M-Factor, Prizma and also band called Energy actually my last band before I leave slovakia country and moved to Northern Ireland. Band Energy was wedding band and also tour band with singer and very good drummer and acoustic guitar player, songwriter Palo Nad, great friend and we have all shared really good times together on live stage and recording studio as well. Energy support another giant band from Slovakia Desmod (support in Dublin as well with band Ajenda). All that was spiced with bands : Trakt, Efekt, and many more....good times with Marian Cekovsky, Ali Kobielsky, Tomas Krak, Dano Hic, Laco Szilagyi (keyboard in Ajenda, Energy, Prizma and Arcon) and so many other great musicians....
In Northern Ireland from year 2004 I started play in the band Voyager with polish musicians Cas Dorna, Piotr Rucinsky and Chris Malinski also my brother Jan Uhrin and singer from New Zeland Ken Hogan. Cas Dorna was songwriter in the band and we played some bluesy stuff ,the best gig with this band was in Ulster Hall in Belfast . All this great musicians I meet in project called The Motion Project (Beyond Skin atm), Darren Ferguson was the guy who put this all together and so many musicians from Northern Ireland (Davy Bates, Paul McMordie...) and from the world join this project and we had some blast over couple of years on the festivals in Northern Ireland ,also do so many workshops in the schools and really enjoyed this times. In The Motion Project I meet Gabriel Makamanzi from Zimbabwe ,we played some african bits and jazz funky stuff and original songs from Zimbabwe, really good times with this band called The Afresh, play some nice venues and festivals through Northern Ireland, Ireland and UK land as well and record the CD in studio. In The Afresh band I meet great musician saxophone player Clarke Wilson and guitar player Cris Todd (The Hardchargers), fantastic guitarist and we also do some original jazzy-funky stuff with my brother Jany and Chris Malinski under name Afresh Players. At this time I also played some weddings and functions in the band The Bizz together with my brother Jany, some good times there as well. After couple of years on scene with Afresh band I join the band Ajenda together with my brother Jany and play some great gigs away in Finland, Slovakia, Scotland, Wales, England, Spain and of course Northern Ireland and Ireland as well. Really enjoyed this band with guitarist and songwriter Gavin Cairns and very special vocal Jenny Walker, we are shared some great times together and supporrt so many giant bands as Pat McManus, The Union, The Quireboys ....and also slovakian top bands Gladiator, Desmod and Horkyze Slize ....With Ajenda I recorded the EP Suommi Sessions and Album called Unrecognizable with great reviews....I have also great experience with live performing in theater and I meet some great actors and musicians (Daniel Perskawiec, musician from Poland)..... Atm I am session drummer and creative songwriter as well and would like to bring in to the music scene much more...former member of the Kaz Hawkins Band looking forward to the next music experience
e-mail : peter.uhrin@"j"ahoo.co.uk
phone : 07851703299