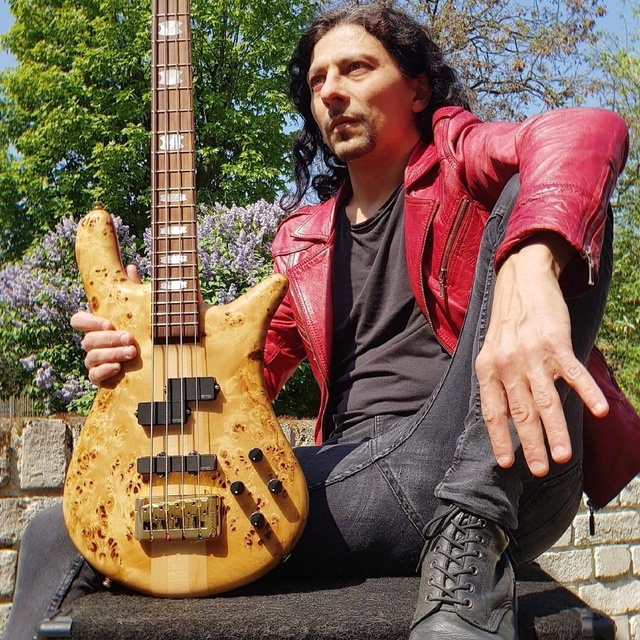 Italian bassist Paolo Succo's musical adventure began at the age of 17 when he discovered that bass guitar would become his life's passion. On the 1st June 1992, he bought his first bass guitar and joined a music course with the bass teacher Roberto Piccolo (Abiogenesi bass player).
He started playing quite a bit in pubs and clubs in and around Turin (Italy) from 1993 since he moved to London. Between 1992 and 1994 he collaborated with few local bands and in 1993 he was working at the Camelot Music Studio. Paolo joined his first important band in 1994, Evasione Parallela, and he did an extensive studio work with them.
Between 1995 and 1999 to quickly improve his music skills, he played with as many bands and musicians as possible and in as many different music types as possible (from pop to rock, from rock to metal and blues).
In 1995 he stopped his music lessons with Roberto Piccolo to take lessons with Roberto Celio until mid-1998 and from 2000 with Massimo Camarca. Roberto Celio and Massimo Camarca are very well-known session bass players in Italy and with their help and by attending top bass player seminars, like Jeff Berlin, he improved consistently his technique. The biggest improvements on the bass have been achieved with the help of Roberto Celio, who focused his study programme on the session bass player career. Paolo also took a few months piano course in 2001 with Nino La Piana to improve his harmonic theory and analysis skills. In 1998, he was introduced to the drummer Gianfranco Marzano by Roberto Celio. Following his meeting with Gianfranco, they started a project called Route 66 that saw on guitar the well-known guitarist and double bass player Massimo Bindi. Route 66 was soon playing in and out the town and being particularly successful amongst rockers.
While playing with Gianfranco he was introduced to some outstanding young musicians, co-students and well established professional musicians like Giustino Barletta, Piero D'Agostino and later Gianfabio Cappello.
In 2001 he collaborated with Piero D'Agostino and other few musicians in several projects from blues to standards jazz/latin songs and he got the opportunity to collaborate with Banzai [Salvatore Larocca] in some occasions. Gianfranco, also helped Paolo in starting his teaching career at the AMM, Modern Music Academy, in 2002. The same year he joined a pop/rock band called Frame and he played with them until 2005 when the band split up. Frame was a very interesting project seeing musicians like Giustino Barletta and later Alex Cordero on keyboards, Luca Vassallo on drum and Marco Valenzano on guitar and soon reached a fair success in the town pubs and festivals. Frame also won a competition as best pop/rock band in 2005.
In 2003 Paolo achieved a big goal in music, he joined his first professional electric orchestral called Magma that was seeing Gianfabio Cappello on drum. With Magma, Paolo had the chance to start playing internationally, especially in France and Switzerland, but also across Italy. From 2003 he was very busy with an extensive live work, that was seeing over one hundred gigs per year. The same year he got a parallel cooperation with the Travelling Band, a tribute band of CCR - Creedence Clearwater Revival.
But the very big opportunity knocked in 2004 when he met Luca Frencia and he joined The Luca Frencia Orchestral. Paolo found himself in the company of like-minded musicians who could appreciate the good music as well as looking ahead to the future. He extensively performed with Magma and Luca Frencia Orchestras, Frame, The Travelling Band and occasionally with the FVG [Forza Venite Gente] musical. The FVG was a charity musical engaging almost 50 people among musicians, dancers and actors and usually performed at the Piccolo Regio Theatre in Turin.
At the end of 2004, another project was born in cooperation with the drummer Emiliano Bonato. The original hard rock project was seeing Ermanno Ubertino on vocal and was performing live covers by Jethro Tull, Deep Purple, Lynyrd Skynyrd and following developed as a progressive rock band in 2005 changing its name into Fear Bother and with a new range of songs by Kansas, MSG, Rainbow, Rush, Steve Morse and so forth.
In 2005 Paolo started a cooperation with Big Mama Band, a 70s and 80s disco music band in Turin and another band called Hearth 'n Blood (a well-known rock band in town) and with both of them he did some studio work and performed live. At the end of 2005 he has a short cooperation with the gothic band Ordeal by Fire.
Paolo moved to London in March 2006 and for personal reasons he reduced the live music workload for the next couple of years, dedicating time to teaching music privately.
In 2008 he started playing again and at the beginning of 2010 he joined the multi-instrumentalist musician and his live band, Andrea Ianni. In 2010 the Andrea Ianni's live project developed rapidly and the trio performed live in London with a heavy rock/funky bass sound. Paolo left the band at the end of 2010 to follow different goals.
He kept cooperating with several bands and musicians working more as a session player rather than a band member.
In 2014 Paolo joined E-Mute, an alternative indie rock project and he played with them until Theo, the main band member, singer and pianist moved abroad.
In 2015 he also collaborated with a Deep Purple tribute band.
Between 2014 and 2016, he attended bass seminars with Jeff Berlin, Billy Sheahan, Stu Hamm, Divinity Roxx, Lee Sklar and TM Stevens.
Since 2017 Paolo is performing in the UK and Europe with Nitroville and he is available for sessions or studio works. Nitroville in 2018 supported Marco Mendoza with his Viva La Rock UK tour.