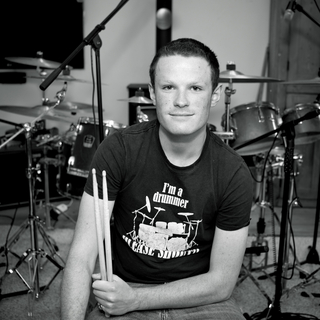 I have recently completed my BMus(Hons) music performance degree specialising in Drums at the Academy of Contemporary Music in Guildford. I studied under some top industry players such as Toby Drummond (We Will Rock You, Wicked), Darren Beckett (Brandon Flowers) and Windsor McGilvery (Hugh Cornwell, Fish – solo ex Marillion). I also studied with John Roberts (The Blockheads) for a year. As well as achieving Grade 8 distinction with Trinity in 2017 I also achieved Edexcel A level music with a B grade and played in my local big band until the end of 2018.

As a very creative, diverse and flexible drummer, I feel like my versatility has given me the opportunity to play a wide range of live performances and record with many different artists, the latest being Carl Jenkins new single ‘Stay with me’ where I created the drum pattern myself. I have also played at main venues across Guildford which include The Boileroom, The Star and The Holroyd Arms as well as bigger music venues in London such as The Unicorn in Camden. For my style of drumming, I cite drummers such as Neil Peart, Phil Collins, Roger Taylor and Taylor Hawkins as my big influences, particularly while I was growing up.

I have a wide range of live performance experience which include playing at some of Guildford’s main music venues such as The Star Inn, The Boileroom and The Holroyd Arms as well as local venues back down towards my family residence in Dorset. My main gigs are currently with rock band Dirty Shirley who I have been the drummer for since 2018, and classic R&B band The Rouge Roulettes. Additionally I am also the live drummer for pop artist Hannah Park and rock band Stattic Paradise. I have additionally worked with other solo artists such as Hollie Beadell and Ollie Sharp in recent times which shows my diversity and adaptability. I also have previous experience working in a recording studio environment (Lakeside Studios, SSL Guildford) and I am comfortable with playing along to backing tracks/clicks.

A standout moment in my career so far has been my first experience of playing in a musical theatre production when I played in my college production of ‘Bonnie and Clyde’ as the Drummer under the instruction of musical director Liam Carey. What I most enjoyed was the diversity of the songs and the opportunity to concentrate on a range of styles during one production as well as it being my first experience with a theatre collaboration.