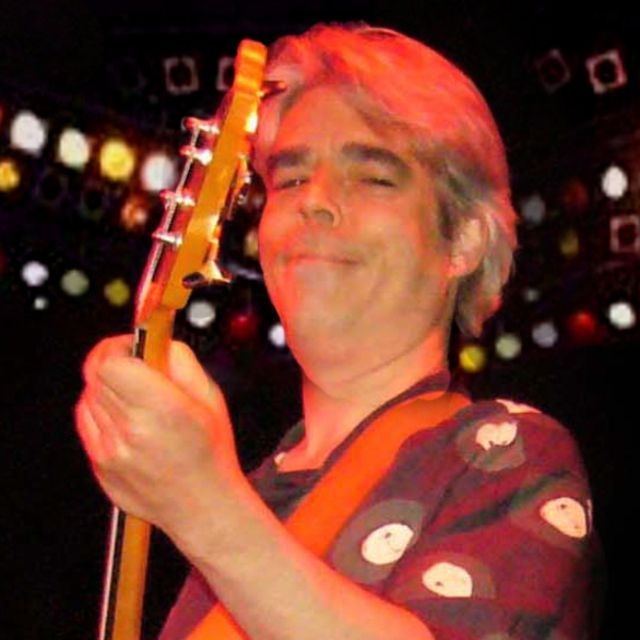 Originally from Edinburgh, classically trained in piano, cello and double bass as a youngster. High points of that career were several appearances at Edinburghâ€™s prestigious Usher Hall â€“ the â€˜exposureâ€™ of such a large auditorium has stood me in good stead for future public performances.

Typically rebelling as a mid-teen against the discipline of the classical regime, acquired first bass at seventeen, a Westone Thunder 1a. The bass-playing of The Stranglersâ€™ JJ Burnel provided a starting point, and after bravely filing down the frets under the upper strings, Im happily playing the same instrument today, some thirty years later. Strings by Vinci, amplification provided by a Trace Elliot GP7SM130.

Dabbling and mucking about with various musicians on the Edinburgh scene during the eighties, I didnâ€™t start gigging until the mid nineties after traveling in Europe and settling in the West of Ireland. There I played in the trio The Elusive Blues Pirates; original material plus Hendrix, ZZ Top, Thin Lizzy, Rory Gallagher and Cream amongst others.

Returning to the UK in 2000, played with a few moderately unsuccessful bands, the most recent being a very successful venture, the Borderline Blues Band. I also managed the bandâ€™s internet presence, photography, sound recordings and designed the BBB logo.

Available now, would prefer to be part of a mostly original material band, or tribute. 3 piece line-up is my favourite. Flexible, but need to make decent money! fruitbats at dot com