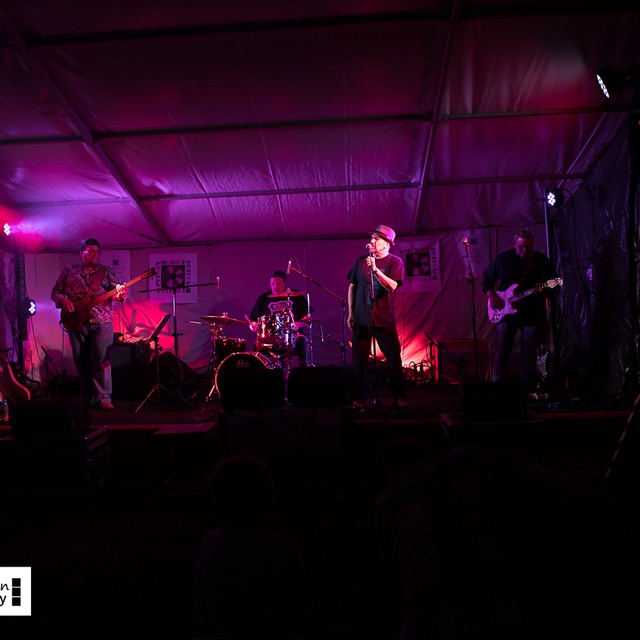 Django are a 5 piece blues-based band located in Wiltshire UK, the band’s members residing in or close to the towns of Devizes, Melksham, Westbury and Chippenham. We’re all seasoned musicians with many years both in and out of the music scene locally and, over the years, have cycled and re-cycled our way through many bands and genres of music.
As we reach the zenith (or is it nadir?) of our musical careers, rather than being slaves to any particular genre or suffering the restrictions of playing covers as close to the original recordings as possible (which many covers bands strive to do), we have instead put two fingers up to the world and said, “bugger it, we’ll play music that we like to play, the way we like to play it”. And what better way to do that than to write our own songs? As Django have found, writing your own material can go a long way to uniting the band and keeping it united because we all have ownership in, and feel closer to, the finished product.
That’s not to say that Django don’t play covers – we do and, although it’s often blues numbers, we do stray into the rock genre but it’s definitely not heavy metal and is possibly best described as “blues with a ‘hint’ of rock”. As some readers will know, a lot of rock, jazz, and even country music has its roots in the blues, so we’re treading a well worn path, but trying to do it the Django way.
If you like what you see and hear on our website or social media pages, please comment on our blog posts, like and share our social media posts, come and see us live, and download our music (coming soon) … come back often as we will be expanding and updating the site frequently. And if you want to discuss booking Django for your event, please contact us – we’d love to hear from you at. www.django-band.co.uk

Screen name:
Blues with a hint of Rock
Member since:
Mar 19 2017
Active over 1 month ago
Level of commitment:
Committed
Years together:
1
Gigs played:
Over 100
Tend to practice:
1 time per week
Age:
61 years