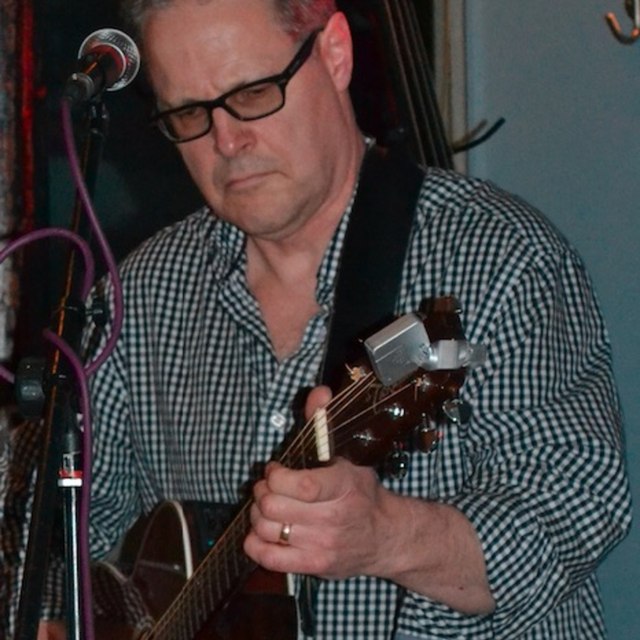 AVAILABLE FOR DEPPING ON BASS, STICK BASS OR GUITAR AT SHORT NOTICE!!!

Since leaving Local Heroes in 2005 I have been playing electric double bass in Cut the Mustard with Martin Abrahams and Jon Ewen on drums. We have been playing since 2005 when we started a regular session in Porters in the Old Town, which we are still playing. We donâ€™t rehearse we just find a good groove and go with it.

I also have depped often, on bass, stick bass or guitar, with many other musicians locally as and when asked. I am part of Hadyn Corrnerâ€™s â€˜Pluto Flower Arranging Societyâ€™ playing electric guitar.

I have performed solo - which is totally different from any other experience I have had. I donâ€™t consider myself as a solo artist but with a loop pedal along with others I give it a go. However, I prefer to work with other musicians.

I am open to any offers on guitar or bass even at very short notice. I prefer not to rehearse although I will if really necessary.

My bass style is solid and dependable and I work closely with the drummer or percussionist to find a solid groove. On guitar, either acoustic or electric, I am not really a solo guitar player so I tend to try to find a melodic rhythm part that adds to the overall song throughout. I use a lot of reverb, echo and swell with this. However, on occasion I will play a solo if the song requires it.

My original influences, apart from the obvious seventies choices, were Rory Gallagher and Wishbone Ash followed later by the guitar style of Andy Summers in the Police. A significant moment was when Arnold Bell, (who is from Belfast - also a cracking guitarist and a big influence!), introduced me to JJ Cale.

Acoustically a huge influence on my guitar playing is John Martyn, a real hero of mine. I cover a few of his songs but I have my own interpretation of them. I am also inspired by Ed Sheeran and James Bay as well as Eric Roche and John Gomm.

I played electric bass for a number of years with This Perfect Day on the northern rock circuit. I then played with another great inspiration for me - Craig Morrison - a more laid back musician I am never likely to meet but what a great player!

Then I moved back south and was the co founder of Millwood a traditional Irish acoustic band that I formed with Karen Tweed the accordion player. I was lucky enough to play with a collection of stunning musicians who played some beautiful tunes - even if it was just 'diddley' to me! We toured a little around the UK and over to Ireland.

This also ran alongside playing bass for the Geoff Sharkey band. Geoff is an incredibly versatile and capable musician who taught me a lot about on the spot improvisation! He taught me much about arrangements and songwriting.

My next major influence was Martin Abrahams who I met in 1987. He and I formed and wrote the arrangements for Local Heroes in Hastings who are still going strong. We started playing acoustically with two guitars, but soon moved to a more electric sound and I moved back to the electric bass. The 'kitchen sessions' with Martin were the most inspiring creativity I've ever experienced and are still going strong!

We became a full band in 2005 when Will Thomson (who pushed me further up to the dusty end of the guitar neck!) and a drummer. I mostly played bass although I did play a little guitar with them. Reluctantly I had to stop playing with them because of work. Local Heroes still remain my personal best collective musical achievement that I am most proud of. They are a great band!