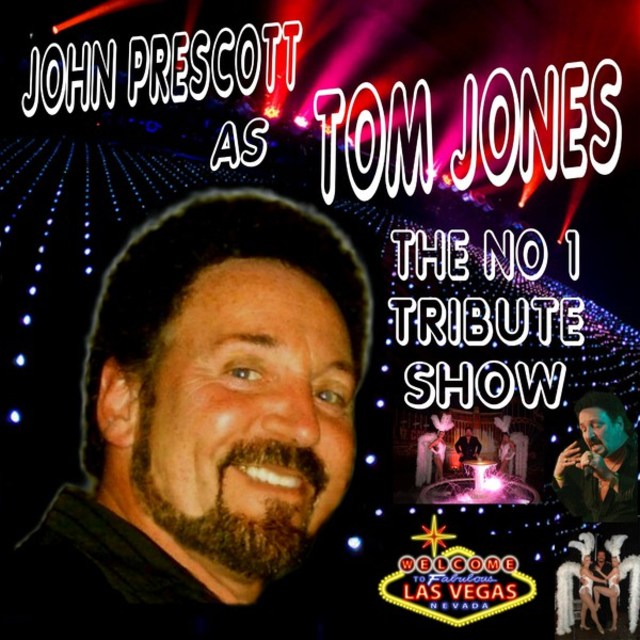 Tom Jones Tribute Act & NO 1 Celebrity Lookalike John Prescott is the international celebrity double for Tom Jones. John Prescott has appeared with his Act on GMTV, Sky News, S4C and ITV and has also starred in Granada TV's Stars in Their Eyes UK tour with Lisa Scott Lee, formally with Steps. He then went on BBC Identity with no other than Donny Osmond and has earned himself the reputation of becoming the best Tom Jones Tribute Act in the World.

John is a top Tom Jones Tribute Act and Tomâ€™s ONLY Celebrity Lookalike that many of you will recognise from the BBC 1 Wales television Commercials, he was chosen to represent the 6 Nations Rugby 2009. Since doing this John has also recorded 2 tracks on the Six Nations Welsh Album for 2010 singing the dance anthems for â€˜Delilahâ€™ and â€˜Green Green Grass of Homeâ€™. He was also requested by the Sunday Night Project to appear on their show with the real Tom Jones and hosted by Justin Lee Collins.
In 2009 John entered the Lookalike competition on the Tom Jones Forum, He won the competition hands down and has been asked to travel to Vegas for an introduction with Tom himself.
John is based in Wales where he is known as the voice of the Welsh valleys, having also performed on the same stage in Pontypridd where Tom started his career.

John's blistering performances are in great demand all over the World including Greece, The Caribbean, Dubai, USA, Finland, Europe and many more, where he has earned the reputation of being a truly sensational vocalist with dynamic stage presence. He performed his Tom Jones Tribute Act in Malta where he was sent to perform with Sir Bob Geldof, and was then appointed to perform with G4 at Cheltenham Open Air festival, to a crowd of 15,000. Events such as these are common in John's diary. In 2009 John performed to his biggest crowd ever there were over 30,000 people of whom many actually believed that they were watching the real Tom Jones. John has also performed his act in Norway supporting Boney M 2009 resulting in many more fly-backs due to popular demand,.which is why it is best to book this act early to avoid disappointment.

From the recent comments on the BBC website Wales/North West, this is just like watching Tom Jones himself. John has fooled many people and still signs autographs as Tom Jones. John is always obliged to have his photo taken with you after the show, so bring your camera!
The Only Tom Jones Tribute Act that actually Lookâ€™s and Sounds like Tom Jones!

Screen name:
A Tom Jones Tribute
Member since:
May 24 2010
Active over 1 month ago
Level of commitment:
Touring
Years playing music:
35
Tend to practice:
1 time per week
Available to gig:
4-5 nights a week
Most available:
Nights